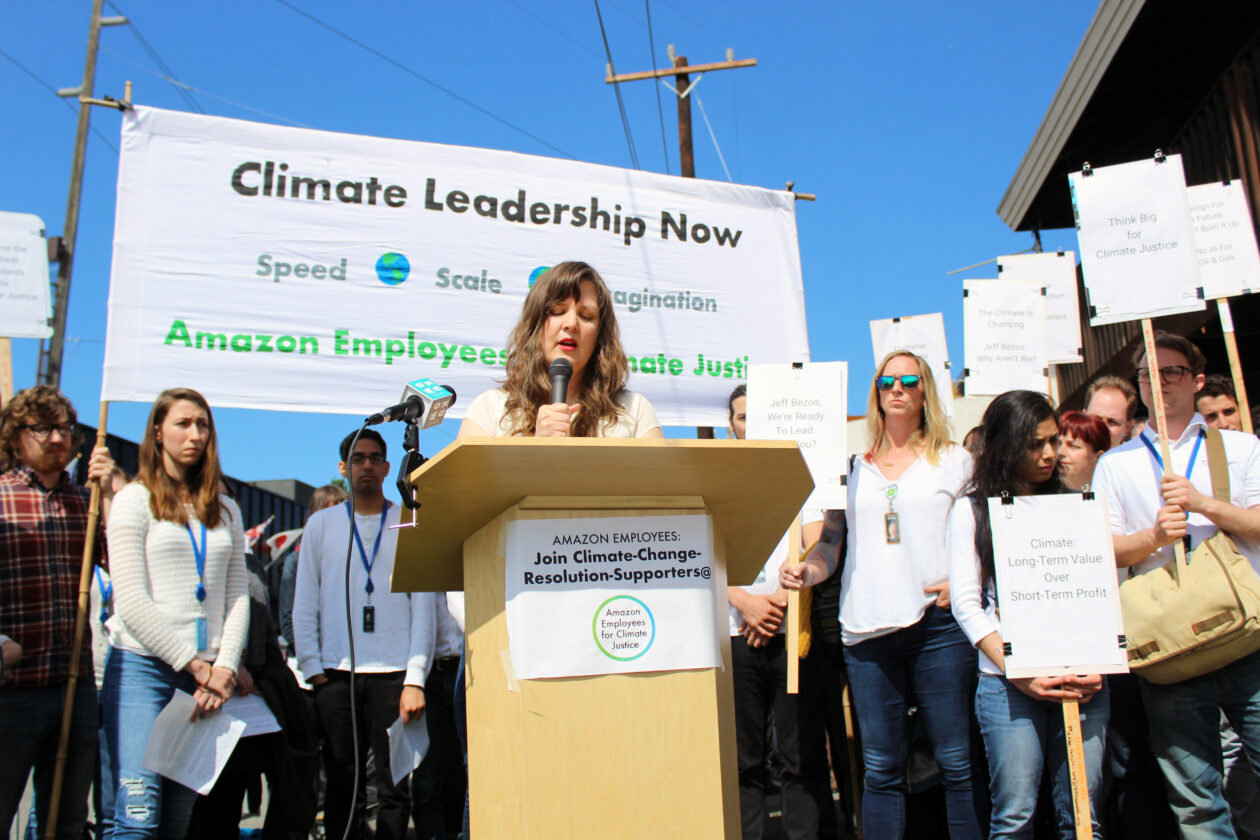 Six hundred and forty Amazon tech and corporate employees have signed a petition urging the company to raise its emissions goals and address the disproportionate impact its emissions have on communities of color. The petition, organized by Amazon Employees for Climate Justice, comes in response to Amazon successfully persuading the Securities and Exchange Commission to bar proposals from shareholders that would have increased accountability for pollution, biased hiring practices, and the company’s treatment of whistleblowers.

Activists say they want to have pride in their work and closing the racial equity gaps in the tech giant’s  operations is a critical part of that.

Why This Matters: Americans trust corporations more than their own government, which means that corporate leaders have an immense responsibility to do well by people and planet. Furthermore, behemoths like Amazon and Apple have the ability to create lasting change as a result of their sheer size. For instance, not only does Apple already power its operations through 100% renewable energy, it’s vowed to become entirely carbon neutral across its supply chain by 2030.

Ultimately, leaders lead from the front. While Amazon’s CEO Jeff Bezos has committed to supporting climate action through his philanthropy, will his company also make necessary operational changes?

Necessary Targets: Experts say that supply chain pollution, like that produced shipping and diesel trucking, should be a prime target for emissions cuts, but pandemic delivery demand surged supply chain pollution to new heights. Already, communities of color are coping with the disproportionate impacts of pollution and climate change, including pollution from factories, refineries, and the landfills where much of the nation’s trash ends up.

It’s a Living: “As employees, we are alarmed that Amazon’s pollution is disproportionately concentrated in communities of color,” Amazon employees wrote in the petition. “We want to be proud of where we work. A company that lives up to its statements about racial equity and closes the racial equity gaps in its operations is a critical part of that.” While Amazon has committed to reaching net-zero carbon emissions by 2040, the petition asks the company to set more ambitious goals by committing to a 2030 deadline. It also asks the company to monitor and report on the environmental and health impacts its logistics and delivery operations present to communities of color and prioritize those communities in its emissions reduction strategy.

“We are committed to finding innovative solutions to reduce emissions and are transforming our transportation network with investments that help us deliver packages more sustainably to support the communities where we operate,” responded Brad Glasser, an Amazon spokesperson. “As part of this work, we co-founded the Climate Pledge — a commitment to be net-zero carbon across our business operations 10 years ahead of the Paris Agreement,” Glasser emphasized the company’s plans to invest in largescale renewable energy and emissions reductions in some of the most impacted regions, but Amazon Employees for Climate Justice say that’s not enough:

“An electric delivery truck in a Seattle suburb doesn’t help a kid developing asthma living and going to school near a major shipping center,” said Selene Xenia, an engineering manager at Amazon and member of the group. “It is not always easy to get leadership to respond or acknowledge quickly. But the more we speak up, the more it is clear that we are heard, and things do change.”