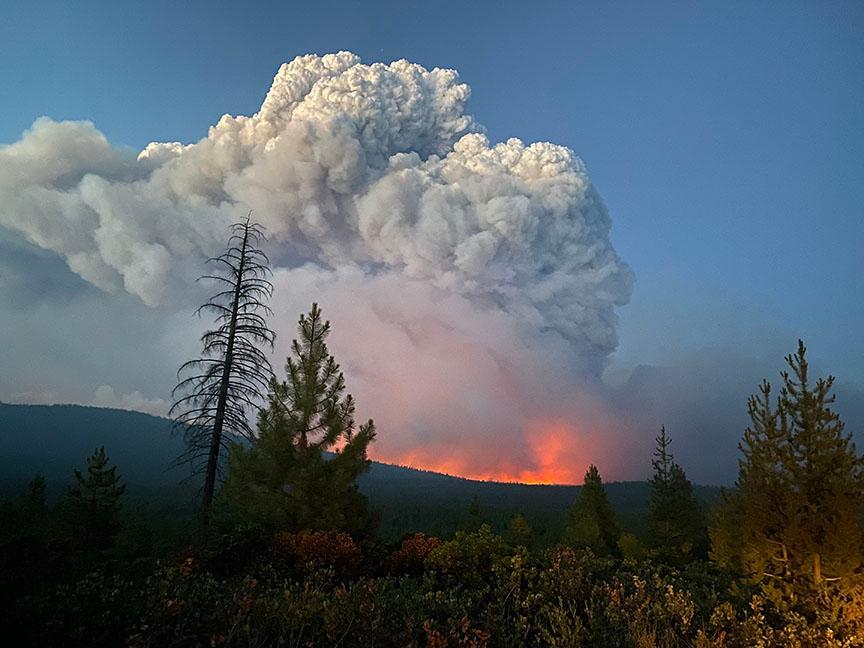 The Bootleg fire in Southern Oregon has grown so large and so hot that it’s creating its own weather. You read that right; the Bootleg fire is disrupting wind patterns, causing fire to spread faster, and has even caused its own lightning. This development has presented an additional hardship for firefighters and forest managers and impaired their ability to forecast how a fire may spread.

Marcus Kauffman, a spokesman for the state forestry department, said, “normally, the weather predicts what the fire will do. In this case, the fire is predicting what the weather will do.”

Why This Matters: The National Interagency Fire Center has now reported 80 fires burning across 13 states, and the Bootleg fire has now been burning for two weeks.

The cycle of drought and rising temperatures that brought these fires to life is only getting worse, and experts predict that next year’s wildfire season will yet again break records. Next year, it may not be just one fire spinning up fire vortexes and lightning; it could be many. Even now, the strongest fires aren’t just disrupting the West; the Bootleg fire alone is so large, it’s impacting air quality on the East Coast.

Bootleg Fireballs: The Bootleg fire is currently the fourth largest fire that has ever burned in the U.S., but experts say it could break the record in the coming days.

Its rapid expansion is attributed to its internal weather systems, which have created winds that sweep fire miles ahead, throws fireballs, and create fast-moving fire tornadoes. Tall updrafts of heat, smoke, and moisture up to eight miles high have made pyrocumulus clouds that can have severe consequences on the ground. The mass of these clouds eventually collapses, falling to the fiery ground below, creating a ripple effect of hot air and fire around it.

Although the Bootleg fire is now 30% contained, fire crews have had to retreat from the fire for the past ten days as it chaotically and unpredictably expands. 2,000 homes have now been evacuated, and more than 170 homes and buildings have been destroyed. 5,000 more homes may need to be evacuated in the coming days. Still, firefighting crews say they’re in it for the long haul.

“We’re in this for as long as it takes to safely confine this monster,” said Incident Commander Rob Allen on Tuesday.”

Experts say that they’d been expecting a severe fire in the region for years but that climate change is handing firefighting crews more than they’d bargained for.

James Johnston, a researcher with Oregon State University’s College of Forestry, says that increasingly dry vegetation and a lack of healthy and controlled burning are at fault for the current crisis.

“It’s an area that’s exceptionally prone to catastrophic fire,” he said. “But what’s changed over the past 100 years is an extraordinary amount of fuel buildup.”

That buildup has translated to rapidly traveling smoke clouds. Smoke from the Bootleg Fire has now traveled 3,000 miles, shocking East coast residents who believed they were safe from wildfires. In some areas, smoke settled near the ground, creating serious health and air quality risks. The National Weather Service office in Albany, New York, documented the view from its windows, “in areas where skies are ‘clear,’ thick smoke aloft is limiting sunshine, with no discernible sunrise visible at our office earlier this morning despite practically clear skies!“

One Cool Thing: A Breath of Fresh Air

Delegates attending the COP26 conference in Glasgow will get to see a very cool display during their stay. So cool, in fact, that it’s been frozen since 1765. Artist Wayne Binitie and scientists of the British Antarctic Survey (BAS) have retrieved an Antarctic time capsule containing the world’s purest air. The pocket of atmosphere was […]