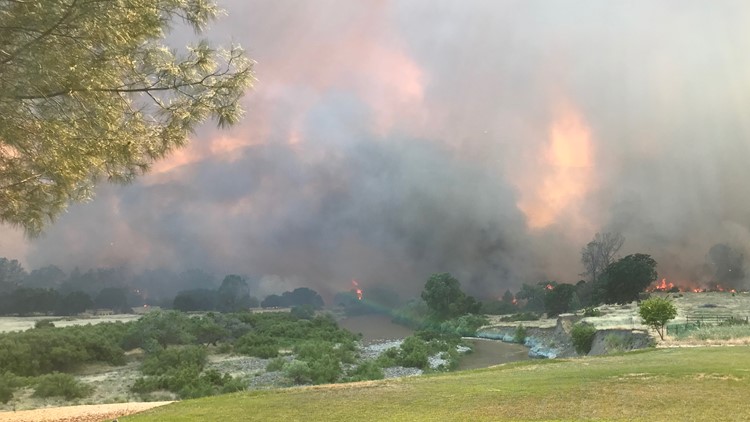 Despite one of the wettest winters on record, the first major forest fire broke out in California over the weekend forcing hundreds to evacuate. The Sand Fire, which scorched 2,220 acres in parts of Northern California’s Yolo County was only 20% contained as of Sunday afternoon and for many residents is serving as a grim reminder of the wildfires they may expect this summer and fall.

PG&E’s Rolling Blackouts: As the SacBee explained, “in Butte and Yuba counties, about 20,000 customers of PG&E Corp. were blacked out in a deliberate outage late Saturday to lessen fire risk. Among those communities hit by the blackout was Paradise, which was largely destroyed by the Camp Fire last November in the deadliest fire in California history. While much of the town’s housing stock was destroyed, several thousand people have moved back home.” After declaring bankruptcy last January and facing mounting threats to be disbanded, PG&E said it will widen the scope of its power shutoffs to include high-transmission power lines, potentially impacting nearly 10 times the number of customers compared to an earlier plan.

Why This Matters: For California residents, the smell of smoke in the air is quickly becoming a terrifying trigger for a potentially impending tragedy. My (Miro’s) mom texted me a photo over the weekend with the horizon as seen from our yard (roughly 70 miles from the fire) covered and smoke and told me the air was too toxic to go outside–I could tell she was unnerved. For other residents, having their power shut off by their utility as a precautionary measure is also incredibly inconvenient and frustrating. There is a growing disparity in the state of haves and have-nots in terms of households who can afford solar plus battery storage on their properties and those who can’t and will increasingly incur power outages that come sporadically and with little warning. It’s the “new reality” as folks keep saying, but how is the nation’s most populous state supposed to cope with these changes when the federal government won’t provide solutions and refuses to do anything about climate change?

A Major Victory for Indigenous Rights Against the Dakota Access Pipeline

A federal judge on Wednesday said the cursory environmental review for the Dakota Access Pipeline was fatally flawed and ruled that the U.S. Army Corps of Engineers has to conduct a full environmental impact assessment – the court is still considering whether to halt operations in the interim.

Why This Matters: The 1,000 mile Dakota Access Pipeline “carries crude oil from North Dakota to Illinois” with “nearly 500,000 barrels of oil” being transported each day through the pipeline.

Visitors Surging To National Parks, Forcing More To Close Due to Coronavirus Concerns

Yellowstone, Grand Teton, and Smoky Mountains National Parks closed on Tuesday due to coronavirus concerns, joining Yosemite National Park, the Statue of Liberty National Monument and Ellis Island because of concerns of crowding in public spaces leading to spread of the disease.

Why This Matters:  As is true with so much of the Trump Administration’s attitude toward containing the spread of the virus, they have left each Park to decide on its own, causing confusion and sending mixed signals to the public and leaving local officials struggling to respond.

Pacific Gas & Electric (PG&E) has agreed to plead guilty to 84 counts of involuntary manslaughter and one count of unlawfully starting the Camp Fire, according to court documents filed in California on Monday, CNN reported and the company has said it will not appeal.

Why This Matters:  California and the company agreed to financial terms last Friday under which PG&E agreed to overhaul their board of directors, and now the legal settlement is done as well.