California’s Million Panel Milestone, Will Batteries Be Next? 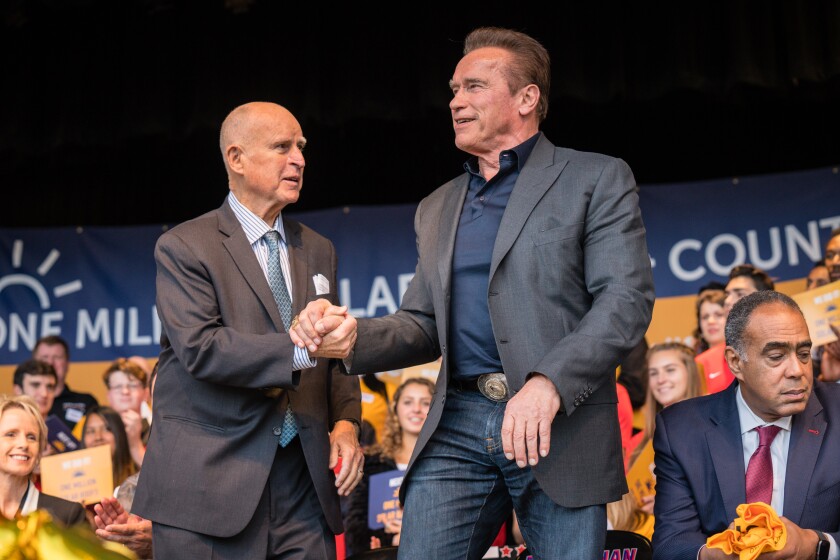 Yesterday, former California Governors Jerry Brown and Arnold Schwarzenegger celebrated a big milestone for their state: the installation of 1 million small-scale solar systems. As the LA Times reported, Schwarzenegger, in 2005 set a statewide target of 1 million solar installations and launched a program that would ultimately set aside more than $3 billion for solar rebates (known as the Million Solar Roofs Initiative). In an interview, Schwarzenegger credited those rebates with growing the market.

The question now becomes: will Governor Newsom help California reach 1 million battery systems to store energy from all those panels?

The Next Step: The LA Times also noted that Dan Jacobson, director of Environment California, thinks the state should aim to install 1 million batteries by 2025. Those systems could store solar power for use in the evening — and help homes keep the lights on when utility companies intentionally shut off power to reduce the risk of wildfire ignitions.

Jacobson said state policies could help spur the nascent battery storage market in much the same way they did for rooftop solar power.

The REAL Sunshine State: While California generates A LOT of solar but battery technology it lacks a viable storage solution for all that energy that energy. As Sun Power explained,

Why This Matters: California is the World’s 5th largest economy and through incentives could help accelerate the battery storage market much in the same way that it did for solar panels. Additionally, a move like this would help drive down the price of batteries and help the state become a true green energy consumer. We have zero time to waste when it comes to acting on climate change and since President Trump refuses to act, big states like California will have to pick up the slack and create the necessary market incentives.

California to Ban Sales of Gas Cars by 2035

Yesterday, California Governor Gavin Newsom announced that the state will phase out sales of all gasoline-powered vehicles by 2035. As Governor Newsom said in a separate event with Democratic governors yesterday, people have climate “goal fatigue” and are ready for the application of those goals–this move on gas-powered cars walks the walk on California’s ambitious […]

One Great Headline: “Renewables to Quench Pepsi’s Thirst for Power”

H/T to renews.biz, an energy news platform, for that headline, and to PepsiCo for making it possible.  PepsiCo, one of the largest companies in the world — with a global carbon footprint — announced plans this week to transition to 100% renewable electricity across all of its company-owned and controlled operations globally by 2030 and […]

A Methane Pandemic: Millions of Abandoned Wells Are Leaking into the Atmosphere

As the candidates debate fracking, millions of abandoned natural gas wells are leaking literally tons of methane into the atmosphere, and there’s no fix in sight. There are an estimated 3.2 million abandoned oil and gas wells in the United States, and an estimated 29 million worldwide.

Why This Matters:  Methane leaks are dangerous — they have led to reports of tap water catching fire, toxic groundwater, and fatal explosions, all of which have been motivators for the federal government to track and seal these wells.