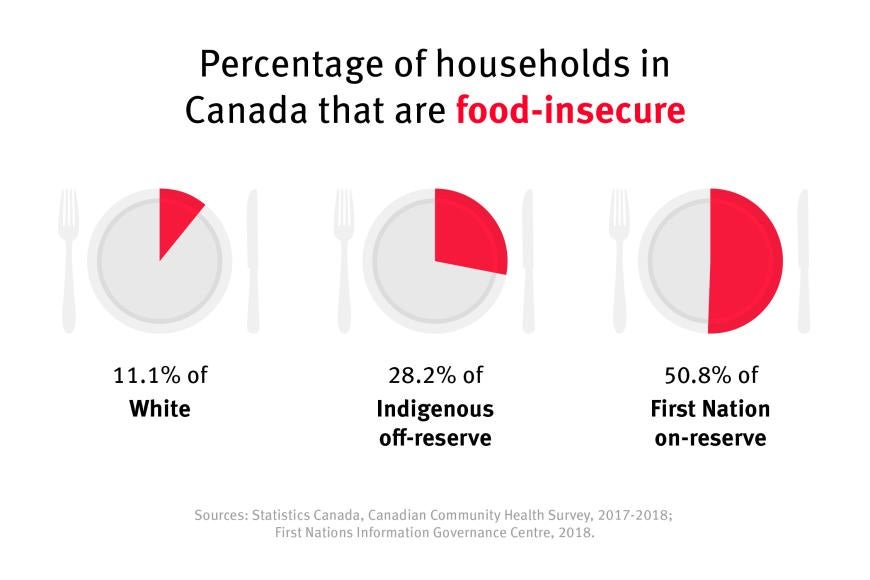 The COVID-19 pandemic has shined a light on BIPOC communities’ systemic lack of access to healthcare and the role that environmental injustice plays in health outcomes. Now, it’s shining a light on food insecurity in some of North America’s most remote regions. Canadian non-profit Mikinakoos Children’s Fund found that the cost of getting food to remote First Nations communities rose by 400% during the pandemic. Experts say this is just one more case of increasing food insecurity across the globe.

Why This Matters: Across the world, traditional food gathering techniques of Indigenous communities are under threat from accelerating climate change and economic pressures.

In North America, most remote of these communities must rely on a two-pronged food system: combining forest and freshwater food harvesting with retail food purchasing.

As rising temperatures disrupt ecosystems that Indigenous communities rely upon for nourishment, many have had to increasingly lean on unreliable retail at exorbitant costs and decreased nutritional value.

Icy Roads: In 2016, the average monthly grocery cost for a family of four in three evaluated northern communities was $1,793.40 and growing. A case of water bottles can cost up to $15, a significant budget breaker for families that often lack access to clean, drinkable water. “The general rule of thumb is that the cost of food for most things is about 1.5 times (or more) higher in remote communities,” said James Morris, founder of Mikinakoos. “If you buy something for $10 in the city, then it’ll be $25, $30 in the community.”

“It’s hard for us to imagine the financial toll this has on families if you think about decades of paying higher prices for every single food item,” said Lorraine Pitawanakwat, a school principal in one remote community. For many of these communities, food insecurity is often an infrastructure problem. Many communities don’t have road access, especially during winter months, but residents say that the government won’t invest in potentially life-saving infrastructure. “The governments don’t care about Native people. In Canada, First Nations people are not a political priority,” said Morris.

Subsidy programs are rife with problems. The Nutrition North Canada (NNC) initiative replaced a previous program and now provides subsidies to fewer foods than before, excluding rice, canned vegetables, and juice. A study from Human Rights Watch found that retailers that abuse the program face little to no repercussions or are kicked from the subsidy program entirely, which could eliminate access for residents in towns with only one store.

Although the government increased funding for the program under a COVID-19 relief package, experts say skyrocketing prices haven’t been completely alleviated. Across Canada and the global Indigenous community, food insecurity is rising alongside temperatures. It’ll take more than an end to the pandemic to ensure food for these communities; it will take comprehensive climate action.