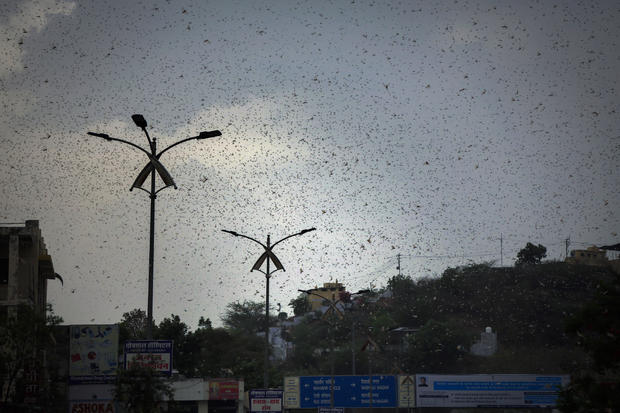 We wrote earlier this year that climate change was fueling an outbreak of swarming locusts in East Africa, and now the insects have made it to India’s heartland where they have devastated crops and livelihoods in a region already struggling with coronavirus, a heatwave in the capital, a recent cyclone, and 100 million people out of work.

As AP reported, the situation has been particularly grim in central India’s Rajasthan, where millions of locusts have been attacking crops since April.

Why This Matters: Locust swarms are not unheard of across Africa and Asia but a warming planet is creating ideal breeding conditions for the insects on the Arabian Peninsula. Larger storms and heavier rains brought on by a warming Indian Ocean create ideal conditions for locust swarms to grow to immense numbers. As EcoWatch explained, “the locusts have already caused significant damage in East Africa before migrating to India through Iran and Pakistan. India’s locust situation could get even worse, both this year and in the future.

“These warm waters were caused by the phenomenon called the Indian Ocean Dipole — with warmer than usual waters to its west, and cooler waters to its east. Rising temperatures due to global warming amplified the dipole and made the western Indian Ocean particularly warm.”

“Heavy rain triggers the growth of vegetation in arid areas where desert locusts can then grow and breed. These locusts, which migrated to India early this year, might have found greener pastures as the pre-monsoon rains during March–May were in excess over north India.”

So essentially, if our planet keeps warming, swarms of this size and destruction could become far more common.

As CBS News explained, locusts are similar to grasshoppers, but can migrate over much large distances: a swarm can cover about 90 miles in a day. The desert locusts are known to form particularly dense, and highly mobile swarms.

Impact on India: CBS noted that the immense crop damage comes as many farmers were already struggling with the impact of India’s 2-month coronavirus lockdown, which left them largely without the workers to tend to their crops.

The New York Times reported that the swarms have overrun one of India’s renowned tiger reserves, Panna National Park, covering the trees in straight lines of countless insects, like a twitching bark. The swarms are so bad that the Indian government has offered to set aside some of its differences with Pakistan to provide the neighboring country with pesticide to spray on its side of the border.

Take a look at what a swarm looks like:

Surprised that no one has blamed Tablighi Jamat for locust attack in India. May better sense prevail. Prayers for all! pic.twitter.com/5Myu4VVO6Q