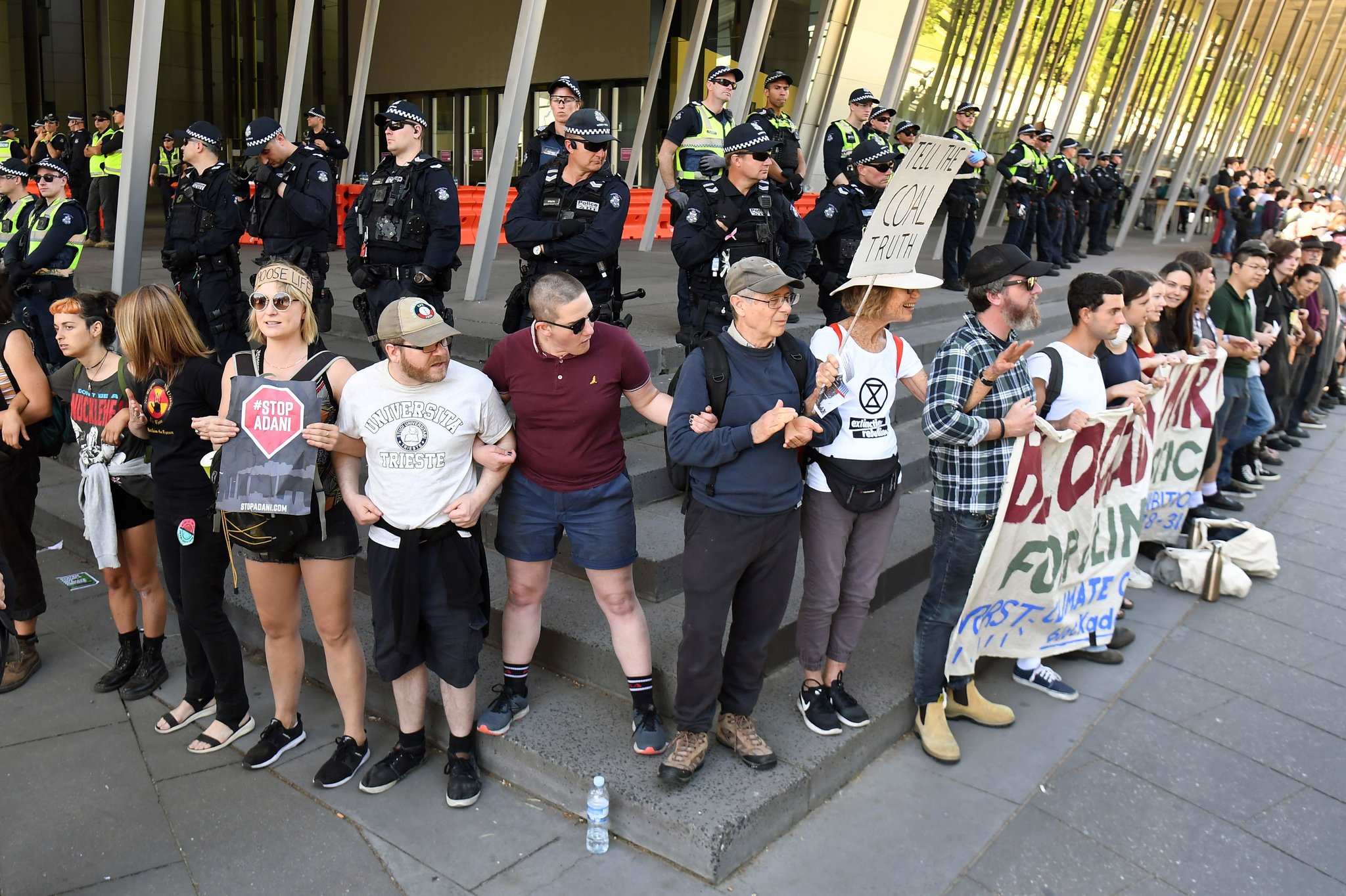 It’s nearly impossible to have lived in a major city across the world this past year without having witnessed a climate protest. Extinction Rebellion protestors who have blocked traffic as well as mass transit in London were at first supported by the public but soon came to be jeered, and physically dragged off of the trains they had blocked by angry commuters and law enforcement officers.

As more and more cities and federal governments crackdown on protests, we’re left grappling not just with free speech issues but about whether alarmed citizens should be prevented from pleading with the public to do something about the greatest threat facing humanity.

Blunder from Down Under: Australia’s government is very pro-coal and vigorously defends the industry which is at odds with the climate action most Australians want. As the New York Times explained, a surge of climate activism is flooding Australia as the country falls behind on its promise to reduce emissions — effectively ignoring the Paris Agreement the Trump administration just abandoned. Prime Minister Scott Morrison has responded with a threat that’s alarmed scientists and free speech advocates, arguing that the government should outlaw “indulgent and selfish” efforts by environmental groups to rattle businesses with rallies and boycotts. In addition, Morrison is also working to prevent boycotts of carbon-intensive industries like airlines.

Australia’s police have been following Morrison’s lead with unethical behavior. As the Guardian explained,

Victoria police have expressed “extreme disappointment” at the behaviour of two officers involved in policing climate change protests in Melbourne last week, after one was photographed with a sticker on his body camera and another was discovered to have posted “inappropriate memes” on his social media.

Why This Matters: In the U.S., we saw how the Trump administration wanted to seek a criminal crackdown on pipeline protests as a way to appease energy-producing states that have stymied climate action. As an almost exact mirror to the protestor crackdown happening in Australia, a fossil fuel industry-friendly leader is trampling on the rights of citizens in favor of aiding corporate interests. That should make us all cringe.

Here’s The Thing: Peaceful protest is our right and most climate protestors are doing exactly this. On the other hand, the ones who are blocking commutes have to contend with headlines like these which paint activists as out-of-touch zealots. Those headlines may be shaping public perception more than the message of climate strikes and while unfair, they should force a conversation about what effective protest looks like in 2019.  My (Miro’s) vote is that more boycotts are needed. Americans will usually always choose cost-effectiveness over altruism but corporations with high emissions or those who donate to climate-denying politicians will pay attention quickly if their bottom lines are being affected.

Go Even Deeper: Actress Jane Fonda has made it her mission to get arrested protesting for climate action each week. So far she’s been pretty successful but listen to her interview with CNN’s Don Lemon about how 2019’s climate strikes are different from Vietnam War protests that she witnessed.

The climate crisis "is a ticking time bomb."

A 5-month investigation from E&E News revealed that scientists at General Motors and Ford Motor Co. knew as early as the 1960s that car emissions caused climate change. As E&E reported, Researchers at both automakers found strong evidence in the 1960s and ’70s that human activity was warming the Earth. A primary culprit was the […]

How to Elect Candidates Who Will Run, Win and Legislate on Climate Change

How do you elect political candidates who will make tackling climate change a priority? That’s the question Caroline Spears and her colleagues sought to answer when they launched the Climate Cabinet Action Fund in 2018, offering tailored climate data, policy ideas, and messaging suggestions to candidates and lawmakers.

Why This Matters: State legislatures play a critical role in crafting and passing policy — to lead on climate and energy policy, paving the way for ambitious national climate action.

Climate Change Is Causing a Stinking Mess in the South — Mold

The amount of rainfall and the number of severe storms that have hit the Southeastern U.S. are causing a lingering, stinking problem —  mold. The State’s Sammy Fretwell reports that researchers who studied the explosion of mold that occurred in New Orleans after Hurricane Katrina 15 years ago now see the same thing happening throughout South Carolina after five years of excessive rain and numerous hurricanes.

Why This Matters:  Mold caused by one storm is awful, but when it is caused by repeated storms and lingering moisture under floors and in walls, there is no easy fix.