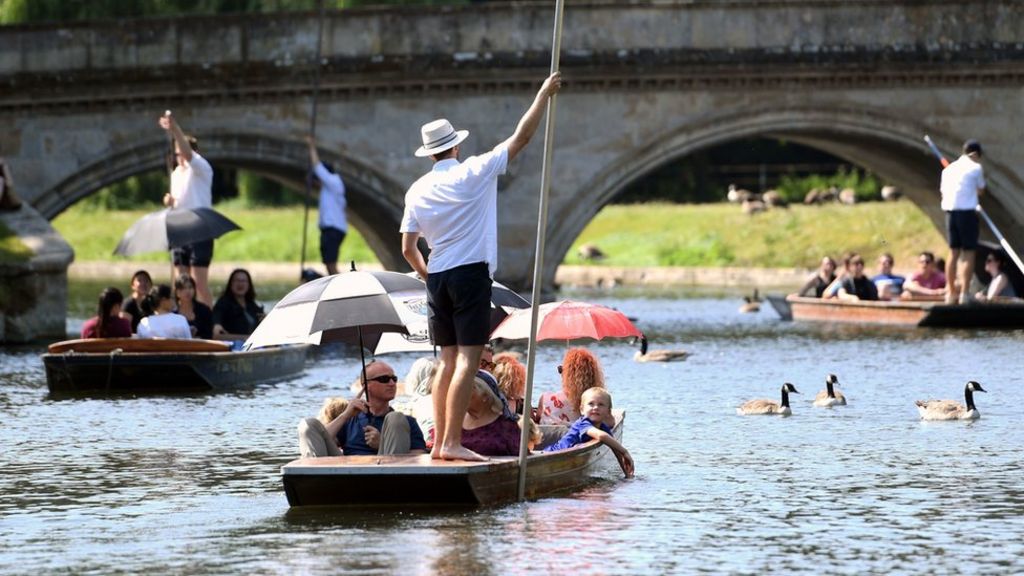 People in Cambridge take to the river to escape the heat. Image: Joe Giddens

A new study published in Nature Communications reported that UK summer temperatures could soon reach and exceed 40°C (104°F). As Olivia Rosane reported in EcoWatch, UK summers, at present, only hit this high temperature every 100-300 years. However, according to the new study, which was released by the UK Meteorological Office Hadley Centre, this temperature could be hit every 3.5 years by 2100 if nothing is done to reduce the impacts of climate change.

Why This Matters: The UK keeps getting hotter. Just last year, the record for the highest temperature there was set at 38.7°C (101.66°F) in Cambridge. The heatwaves of that summer may have caused 900 extra deaths. But now, as the lead author of the study, Dr. Nikolaos Christidis, has said, “the likelihood of extremely hot days in the UK has been increasing and will continue to do so during the course of the century.” This new temperature norm would have immense impacts on UK public health, water supply, agriculture, and infrastructure. The new study is thus yet another indicator of the potential impacts of human-caused climate change and the need for strong, global actions to be taken towards its mitigation.

“Poorly Prepared” for Climate Change: The UK, in particular, is “poorly prepared” for the impacts of climate change, to quote the UK Committee on Climate Change’s June 25 statement. As Professor Piers Forster of the University of Leeds told The Guardian, “Heatwaves are a real risk to life in the UK, especially if we do not begin modifying our homes, workplaces, and hospitals to manage their expected overheating.”

Not Only the UK: Rising temperatures, of course, are not solely a UK concern. As we reported last week, the South Pole is warming over three times faster than the global average. And just last month, a Siberian town recorded a temperature of over 100°F for the first time. This study provides another pinpoint in a quickly growing map of temperature rises around the world.

And, as Professor Forster noted, with regards to heatwaves, the UK will “get off lightly compared with most other nations,” particularly the crop-growing regions of the world. This, Professor Forster points out, could have “more profound effects, both globally and for the UK.”

According to The Guardian, some scientists suggest that the high-emission rate found in the new study is “unrealistic,” considering the attempts some 200 countries are making to cap carbon emissions under the 2015 Paris agreement. And yet, even with the study’s “medium-emissions scenario,” which posits a reduction of emissions but less so than required by the Paris agreement, the temperature would reach or exceed 40°C every 15 years.

UK Climate Commitment: Ever since Prime Minister Boris Johnson took over as Prime Minister last year, Britons have asked whether he can be trusted to set an ambitious climate agenda. Johnson hasn’t been consistent on his views regarding the climate crisis and climate action (he previously called concern about climate change “without foundation”). Though earlier this year he set out his climate agenda which, if implemented, would have some teeth. It includes: