Extreme Weather Displaces Millions in 2019, The Year’s Not Even Over 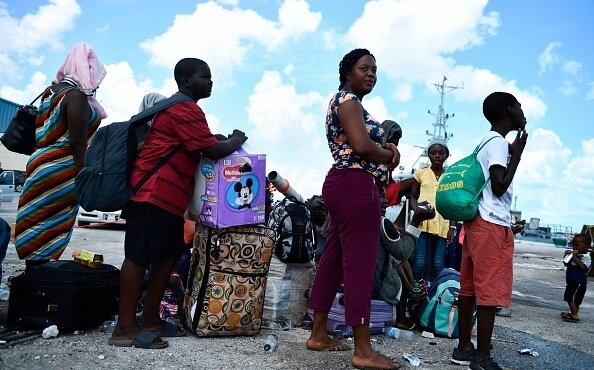 People await evacuation at a dock in Marsh Harbour, Bahamas, on Saturday in the aftermath of Hurricane Dorian. Brendan Smialowski/AFP/Getty Images

A new report put out by the Internal Displacement Monitoring Center, (IDMC) has revealed that extreme weather events have displaced a record-setting 7 million people in the first 6 months of 2019. As the New York Times reported the IDMC, “which compiles data from governments, United Nations humanitarian agencies and media reports, concluded in a report published Thursday that floods, landslides, cyclones and other extreme weather events temporarily displaced more people in the first half of this year than during the same period in any other year.”

What’s The Issue?: Extreme weather is becoming an increasing risk for people across the globe as climate change continues to exacerbate droughts, make hurricanes more destructive, cause heatwaves to become more lethal etc. The UN Refugee Agency identifies the threat from climate-driven disasters in the following way:

“People are trying to adapt to the changing environment, but many are being forcibly displaced from their homes by the effects of climate change and disasters, or are relocating in order to survive. New displacement patterns, and competition over depleted natural resources can spark conflict between communities or compound pre-existing vulnerabilities.”

The Real Impacts: We’ve just seen the devastation caused by Hurricane Dorian as the colossal Category 5 storm sat over the Bahamas bringing with it torrential rain that only multiplied the threat posed by the storm surge. Additionally this year, events like,

Why This Matters: According to the Norwegian Refugee Council, in 2018, more than 17.2 million people fled disasters in 125 countries and territories. Disasters displace three to ten times more people than conflict and war worldwide. Climate change is already leading to increased instability around the world and we’ll only see this trend increase unless we commit to drastically reducing climate emissions and better funding extreme weather forecasting and relief efforts (like the National Weather Service and FEMA here in the U.S.). The world will also need to assess how nations will accommodate (or not, in the case of the Trump Administration) the flow of climate refugees. Additionally, the costs of these extreme weather events keep piling up. Check out this graphic that MSNBC’s Chuck Todd recently shared on his program:

Temperatures are forecast to continue to exceed 110 degrees across the Southwestern U.S. this week — Phoenix might set a record for its all-time high. But it’s not only going to bake the South — the heatwave will cause 100-degree temperatures across the Ohio Valley and into the Mid-Atlantic. At the same time, NOAA forecast that a “La Niña” (cooling of the ocean near the equator in the Pacific) could develop later this year increasing the likelihood of fall hurricanes, as well as a colder winter for some parts of the country.

Why This Matters:  The very areas of the country that are being ravaged by COVID-19 are now experiencing the worst of the heatwave too.