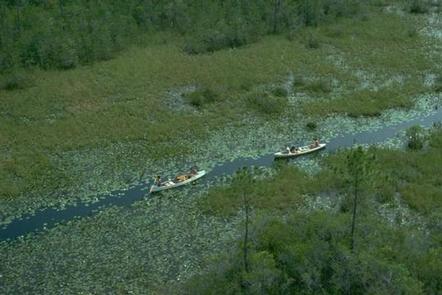 Companies have been trying to mine near Georgia’s Okefenokee Swamp National Wildlife Refuge for decades without success, but last August the Army Corps of Engineers determined that now no federal Clean Water Act permit is needed because there are no water bodies covered by the law that will be impacted.  Earlier this year, The Trump administration finalized the “Navigable Waters Rule,” which greatly reduced how many bodies of water receive federal protection. Previously, the Okefenokee Swamp was protected under the Clean Water Act, but now, the mining company, Twin Pines Minerals, can go forward with extracting titanium in a 600-acre area around the refuge regardless of the impacts on the Swamp or the Floridan Aquifer, which is an important water source in the region.

Why This Matters:  The president of Twin Pines claims that the mining operation won’t affect the swamp — but now we will just have to take their word for it since it won’t have to go through federal permitting.  Environmentalists fear that the mine would harm the swamp’s ability to store water, damage its habitats, and increase the risk of wildfires.  The swamp is about half the size of Rhode Island — but is not covered by the Clean Water Act as it has been interpreted by the Trump administration. This is a painful illustration of the devastating effects of the Trump environmental rollbacks.

The Dire Consequences of Mining

“The only data, anywhere, to suggest that mining would prove benign was that commissioned by Twin Pines itself,” Christian Hunt, the Southeast Program Representative with Defenders of Wildlife, told The Hill.  “I can go through a whole litany of threats to the hydrology, to nature,” Rena Peck, executive director of the Georgia River Network, told NPR. The threats include: pollution in streams, lower water levels in the swamp and light pollution that would seep into the refuge. The swamp also has deep cultural significance for the Muscogee (Creek) Nation, who were forcibly removed from the area in the 19th century. The Muscogee gave Okefenokee its name, which is said to mean “bubbling water.”

This isn’t the first time that a company has tried to mine in the Okefenokee Swamp. In the 1990s, chemical giant DuPont planned to mine titanium in nearly the same place as the Twin Pines plan. However, the plan met opposition from the public and from the federal government, so much so that DuPont didn’t submit a permit application, and instead donated 16,000 acres of the Okefenokee to the nonprofit Conservation Fund in 1997.

While this new 600-acre project will still need a permit from the state of Georgia, it’s likely to go through. The county commission unanimously passed a resolution in support of the project in August, since the mining operation is expected to create hundreds of jobs. The plan has the Trump administration’s support as well, because it argues that finding domestic sources for minerals like titanium is a national security priority.

But the potential benefits of mining do not outweigh the costs. Teresa Crawford, who grew up near the swamp and testified for the county commission in August, told NPR: “The Okefenokee swamp is just a treasure. We can’t make a new one. And if it’s destroyed, I mean, it’s gone forever.”