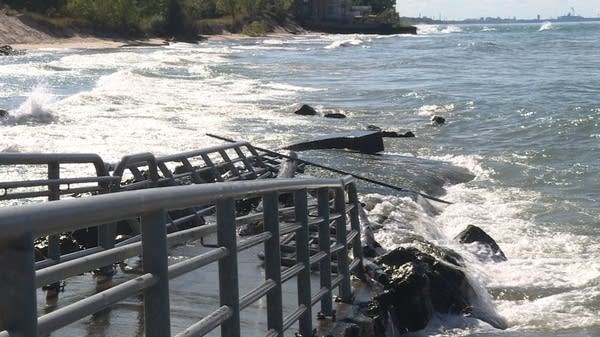 A sunken walkway in Indiana Dunes National Park was built to help people with disabilities enjoy the lakeside view. Due to erosion, visitors can no longer use it. Image:Tyler Lake/WTIU

As Indiana Public Radio explained, “Erosion isn’t just affecting homeowners — it could also drive tourists away. Millions visit Indiana’s lakeshore every year. In Porter County alone, they contribute more than $350 million to the local economy annually, helping to fund everything from schools to fire departments.”

Why This Matters: What makes shoreline erosion along the Great Lakes so difficult to predict is that there are several forces that contribute to the damage. Increasingly heavy rains bring more water, warming weather causes evaporation, and extreme cold air outbursts as well as disappearing winter ice barriers on the sand all put different stresses on the shoreline making it more difficult for it to recover. It’s very much uncharted territory for the over 30 million people living within the Great Lakes basin.

A Growing Concern: Scientific American wrote last year that as recently as 2013, water levels on most of the Great Lakes were very low.

What the Experts Say: Last summer, Lake Michigan broke its high-water record of 33 years, topping at 582.18 feet on July 23, according to NOAA’s Great Lakes Environmental Research Laboratory. As E&E News wrote, “that’s 2.8 feet higher than the mean July lake level over the last century, and 6.2 feet higher than it was six years ago.”

Scientists like Richard Norton, a University of Michigan professor and expert on coastal zone management, are expecting the unexpected. He noted that,

“We don’t know what the long-term standing water level is going to be. We do believe variability is going to continue between low water and high water. And when the water comes up, it’s going to come with a vengeance.”

What Can Be Done: E&E News also explained that experts worry that current environmental laws are insufficient to address today’s challenges. In Michigan, state efforts to address coastal erosion date back to the 1970s and early 1990s. This year, Michigan Governor Gretchen Whitmer was urged to issue a state of emergency for Michigan’s shoreline erosion which would open the door to federal dollars from the Disaster Relief Fund, administered through the Federal Emergency Management Agency (FEMA). Her proposed 2021 budget set aside $40 million to help communities dealing with “the negative impacts of Michigan’s changing climate conditions” but many wonder if this is enough to address the breadth of the challenges Michigan faces.

By Amy Lupica, ODP Daily Editor In August, the federal government declared the first-ever water shortage along the Colorado River as drought pushed its largest reservoir, Lake Mead, to record lows. Now, that shortage is threatening the power supply of 5.8 million homes and businesses and water levels at the nation’s second largest reservoir, Lake […]

By Ashira Morris, ODP Staff Writer The controversial Line 3, a pipeline expansion under construction in northern Minnesota that would transport one million barrels of tar sands per day, hasn’t begun operating yet, but is already causing harm. The line’s construction, coupled with drought, has created low water levels in Minnesota lakes where Indigenous Anishinaabe […]