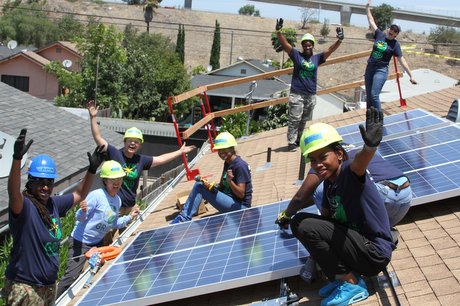 In the United States, the green economy generates $1.3 trillion in annual sales revenue while creating 9.5 million full-time jobs (4% of the working-age population). That’s according to a new study from University College London climatologist Mark Maslin and researcher Lucien Georgeson whose research shows that the green economy has 10 times more jobs than the fossil fuel industry in America.

Key Points: While gathering data on the green economy was difficult because our government doesn’t keep data on this sector (The Bureau of Labor Statistics used to publish a “Green Goods and Services” survey, but it was discontinued in 2013 following budget cuts), the authors of the study noted that,

“The green economy is driving growth and job creation in the United States, but as the rest of the world catches up, the U.S. will have to enact new and supportive policies to remain competitive.”

The Facts Speak: As Silvio Marcacci wrote in Forbes earlier this year, the economic prowess of the renewable energy sector is undeniable.

So Why Aren’t More Labor Unions Behind the Green New Deal? The Green New Deal (GND), a framework proposed by Democrats earlier this year to make massive investments in renewable energy infrastructure and green jobs, hasn’t been universally embraced by labor unions. Unions like the Laborers’ International Union of North America (LIUNA) and the United Mine Workers have remained skeptical of the GND and worry that Democrats don’t have enough specificity to ensure a “just transition” for fossil fuel workers who may lose their jobs.

Why This Matters: It’s undeniable that the jobs of the future–as well as the jobs necessary to fight climate change–will come from renewable energy generation but also sectors like electric vehicle manufacturing, carbon capture, waste management, etc. This fact is especially important for Democrats who want to beat Donald Trump and win both houses of Congress: they have to start talking about the jobs that will be available to workers through their vision of the future. Currently, Democrats are worried about losing Ohio in the presidential race, a state that has seen mass layoffs of workers, yet Sen. Sherrod Brown (Ohio’s only statewide Democratic representative) refuses to support the Green New Deal as it’s not resonating back home. Democrats have to be more clear about where American jobs are coming from and be specific about why they are the party that will continue to support these jobs and the workers who need them.