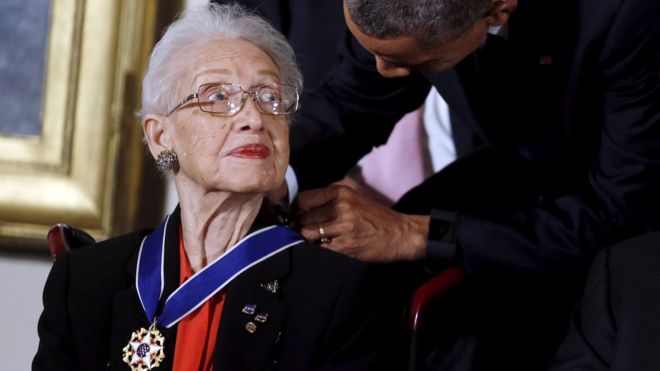 Katherine Johnson who was one of the finest NASA mathematicians of her time and whose calculations made possible the first U.S. crewed spaceflights, passed away at 101 on Monday. As the New York Times reported, “Mrs. Johnson was one of several hundred rigorously educated, supremely capable yet largely unheralded women who, well before the modern feminist movement, worked as NASA mathematicians. But it was not only her sex that kept her long marginalized and long unsung: Katherine Coleman Goble Johnson, a West Virginia native who began her scientific career in the age of Jim Crow, was also African-American.”

Johnson had previously calculated the trajectory for the space flight of Alan Shepard  (the first American in space) and it was her skill and reputation that made John Glenn ask for her specifically as he refused to fly unless she verified the calculations. She also helped to calculate the trajectory for the 1969 Apollo 11 flight to the Moon.

Johnson was depicted in the 2016 film, Hidden Figures, after decades of most Americans being unaware of her contributions to science. President Obama said it best,

After a lifetime of reaching for the stars, today, Katherine Johnson landed among them. She spent decades as a hidden figure, breaking barriers behind the scenes. But by the end of her life, she had become a hero to millions—including Michelle and me. pic.twitter.com/isG29nwBiB

Hero of the Week: Catherine Flowers

Catherine Flowers is an environmental justice advocate in Lowndes County, Ala., where she began her advocacy work after watching raw sewage leak into the yards of poor residents who lacked access to a municipal sewer system. Lowdnes County is one of the ten poorest counties in Alabama’s Black Belt–a part of the United States where […]

This week we talked with Justin Onwenu, a Sierra Club community organizer in Detroit working on environmental justice and the COVID-19 pandemic.  Justin is a member of Michigan Governor Whitmer’s Environmental Justice Advisory Task Force and the Democratic National Committee’s Council on the Environment and Climate Crisis.  Here are some of the highlights. On Environmental […]

In New Zealand, the votes from their election over the weekend are tallied and Labour Party Prime Minister Jacinda Ardern notched a huge victory — the biggest for her Party since 1996.  She received a mandate with the support of a majority in Parliament, and delivered the first 30 seconds of her victory address was […]