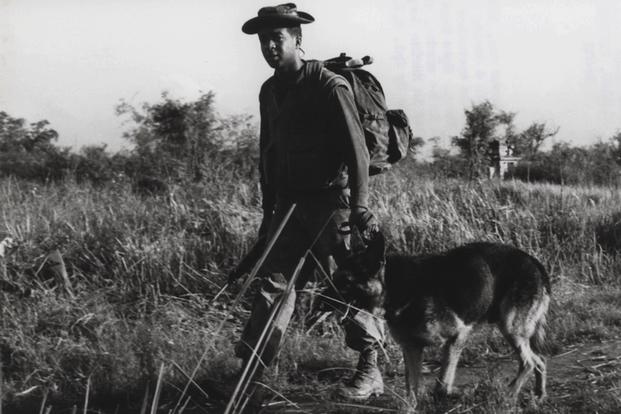 Kaiser was a German Shepherd and one of 4,000 dogs who served in the Vietnam War. His handler was Marine Lance Cpl. Alfredo Salazar.

In fact, you may have read recently about Conan the German Shepherd who helped accompany Delta Force soldiers into Syria’s Idlib Province to take down ISIS leader Abu Bakr al-Baghdadi. Animals have many skills that humans can’t replicate with technology but handily rely upon in combat, patrol, and reconnaissance.

Marine Mammals To the Rescue: As NatGeo recently wrote, bottlenose dolphins and California sea lions have been trained by the US Navy for decades as the ability of these animals to detect and find targets at depth or in murky water is something technology can’t duplicate yet but which militaries find very valuable. The Navy trains these animals to,

The History: Going back centuries, animals have been used in armed conflict–though unfortunately not always ethically.

Why This Matters: We should remember to honor animal veterans today in addition to the human ones. The bravery of animals helps save countless human lives and we owe them a huge debt of gratitude.

Go Deeper: Read about these 5 amazing dogs of war and their remarkable stories.

By CT Harry To unearth a solution to a problem, it is often said that one must start from the truth—and then work your way from there. This is as true of the resolution of problems within the realm of nature as it is of those within human society. Even though our legislative successes as […]