It’s always darkest before the dawn. Which could be true for climate change, too. 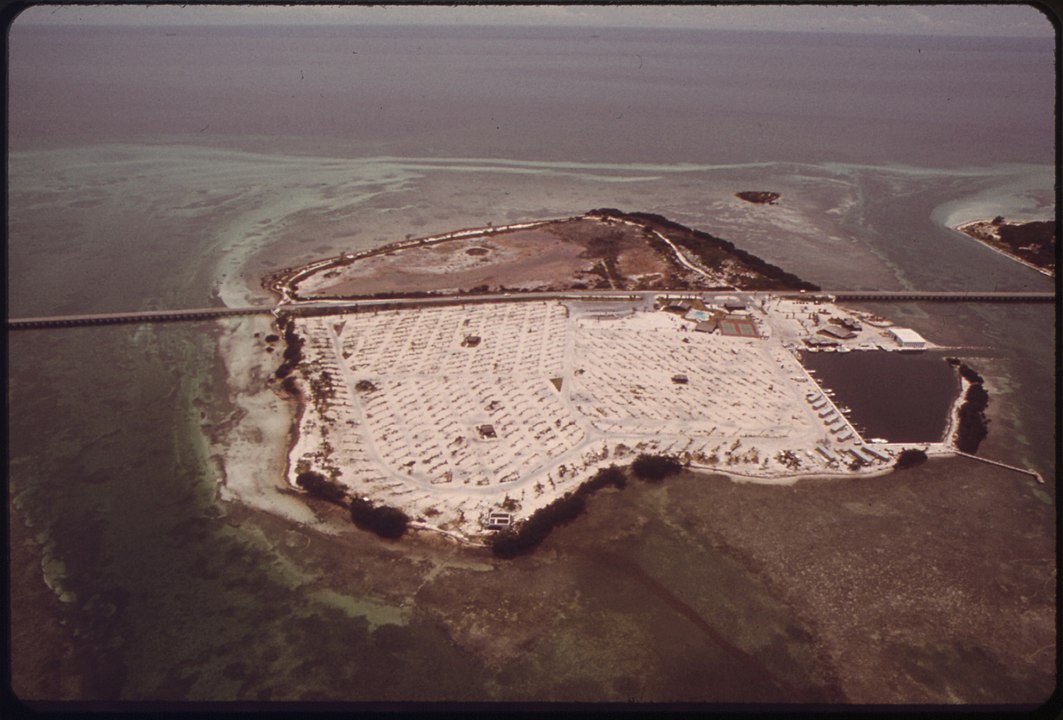 Ohio Key, also known as Sunshine Key, where Rachel Carson camped in 1955 while gathering data for one of her first books on the environment. Since then, half the key has been dredged or filled for a trailer park, seen here. The Overseas Highway linking the Florida Keys to the mainland runs through the middle. Image courtesy EPA/National Archives

This piece was originally featured in the Bulletin of the Atomic Scientists and has been reprinted with permission.

This is a new Silent Spring moment.

Rachel Carson’s 1962 seminal book Silent Spring—about the harm that pesticides like DDT can cause to humans and the species we share the planet with—is often cited as a catalyst for the great period of progress that ensued over the next decade in enacting protections for the environment and ecosystems. Following many years of accelerating environmental degradation, Carson’s book primed Americans’ consciousness on issues such as exposure to toxic chemicals, and the malfeasance of corporations in hiding their polluting ways. By 1969—when the Cuyahoga River caught fire in Cleveland and oil spilled in Santa Barbara—the environment had become a high priority for American voters.

And Congress took notice. America’s first national environmental law, the National Environmental Policy Act, was signed by Richard Nixon in 1970, who went on to declare the 1970s the “environmental decade.”

And so it became: In the short span between 1970 and 1973, the Environmental Protection Agency (EPA) was created; the Clean Air Act was amended to expand the federal role; water pollution controls were expanded with the Clean Water Act; and the Endangered Species Act was approved. Later in the decade Congress enacted the Safe Drinking Water Act and the Toxic Substances Control Act, among several other regulations designed to keep the country safe from pollutants.

Sad and shocking environmental injustices continue to this day, unfortunately. For example, industrial plants that can spew toxic emissions into the air and seep carcinogens into the groundwater are often sited near black and brown communities. African-Americans, for instance, are 75 percent more likely than others to live near facilities that produce hazardous waste.

Overall, however, these 1970s regulations—some subsequently amended—worked reasonably well through the mid-2010s. The EPA reported that from 1980 to 2012, aggregate emissions of six principal air pollutants decreased by two-thirds. Carbon dioxide—a major contributor to climate change—became regulated as a pollutant. Water quality became marginally better, though not as good as it could have been if non-point sources of pollution—meaning sources of pollution such as agricultural runoff, which usually is not easily discernible, discrete, or confined to a particular pipe or channel—had been better monitored and controlled. Meanwhile, during that span America’s Gross Domestic Product expanded by 133 percent.

Over 125 environmental and greenhouse gas emissions rules and regulations have been on the chopping block over the last four years—and it could have been worse. Overall, the Trump administration has only succeeded in implementing 16 percent of its proposed deregulatory actions. The vast majority of them have been defeated or are still being challenged in the courts. But some of the ones that have survived legal challenges by environmental nongovernmental organizations could result in big consequences, such as the EPA’s postponement of compliance dates for restrictions on toxic-metal wastewater discharges from power plants.

Even in the hyperbolic news cycle of the last few years, climate and the environment have kept a high profile. The firehose of bad news for our biosphere includes the placing by the Trump administration of industry-fawning executives at the head of environmental agencies like the EPA and the Bureau of Land Management, and the numerous proposed anti-environmental actions during the last few years—while the ever-more-frequent headlines about the disastrous symptoms of the climate crisis keep coming.

That’s how the late 2010s could become the new 1960s—a decade that heralds change in the years to come.

Even before Trump took office, support for environmental organizations exploded. Immediately after the 2016 election, some US-based environmental organizations garnered tens of thousands of new supporters, while others quadrupled their rate of donations. Three years into the Trump term, at the end of 2019, two-out-of-three Americans surveyed said that the federal government was doing too little to protect air and water quality or reducing the effects of global climate change. By early 2020, nearly as many Americans (64 percent) said that protecting the environment should be a top policy priorityas said this about strengthening the economy (67 percent). The percentage of Americans concerned or alarmed about global warming grew from 41 percent in 2015 to 54 percent in 2020.

As a result of all this, whenever I deliver climate context in my weathercasts, give lectures, or provide other presentations on climate change and the environment—I frame the present era as a Silent Spring moment. On the subject of the rapidly changing climate and environmental degradation, it’s always important to provide a reason for hope. Otherwise, disbelief, powerlessness, and fear can induce feelings of paralysis in many people. I want to keep my audience from throwing their hands in the air to exclaim: “It’s so bad, there’s nothing we can do about it!”

Today I stopped by Thomas Built Buses in High Point, North Carolina. The union workers there make electric school buses. These are the kinds of jobs we will create through the American Jobs Plan. pic.twitter.com/CuTffJm5Zu — Vice President Kamala Harris (@VP) April 19, 2021 The Biden Administration is not waiting for Earth Day, it is […]