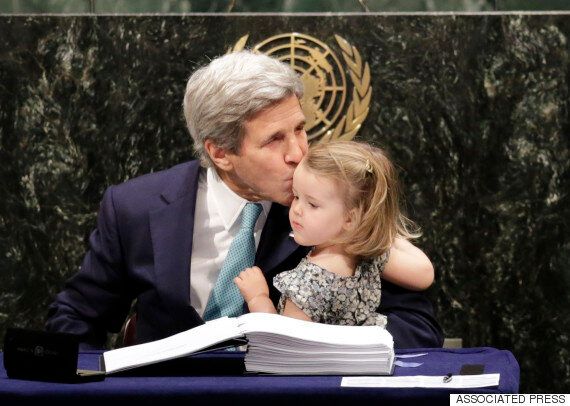 Former Secretary of State John Kerry now leads World War Zero — a coalition of people who are committed to addressing the climate crisis.  Tune in to their Earth Day Inside event tonight 6:30-7:30 PM ET.

ODP:  What is your most indelible memory about the first Earth Day?

JK:  My brother Cam got me involved in the early efforts at home in Massachusetts. It was the first activist experience I had after coming home from the war. I’d read Silent Spring, like a lot of people my age. But I didn’t think of myself as an activist yet, and I didn’t think of there being an “environmental movement,” at all. But I was captivated by this experience, and by the mosaic of people participating that day. You had gray, blue-haired older ladies from the Garden Clubs, side by side with long-haired college kids, and until that day they probably didn’t realize they had much in common. You had young mothers who had read about toxic chemicals in their breast milk. You had people who couldn’t fish anymore in the streams and rivers and had probably voted for Nixon, side by side with dyed in the wool activists. And they all believed they could make this cause an issue that politicians had to pay attention to, and, for me, that really mattered at that moment in my life. I’d come home angry about the war in Vietnam, and really questioning whether politics was responsive anymore and whether you could make government responsive to truth and facts. And here we were on Earth Day seeing that, in fact, a people-powered movement really could do that still in our country.

ODP:  How do we capture today the sense of urgency around environmental issues that you were able to galvanize on that day in 1970?

JK:  You organize! It’s that simple. You know, when I look back at 1970, you realize how much harder it was then to get attention on an issue. I bet today, most people haven’t heard of a mimeograph machine. The only advertising was on television or in print newspapers and that was expensive beyond the means of most grassroots activists. There was no YouTube. Today you have so many more ways to reach people. And cheaper ways! But the common denominators are passion and facts. You have to know the subject matter inside and out so you can communicate effectively and combat the disinformation. You have to connect the grassroots with the grass-tops. You have to unite unlikely allies. That’s why we started World War Zero, to get people of different backgrounds to lock arms at least figuratively to communicate this challenge. And we have to show people the answers are opportunities. The solutions on climate are actually good for our economy. In 1970, we didn’t have proof of concept of that either – today, we do, in part because of 50 years of what was unleashed on that first Earth Day. Look back at the scare tactics of what the big polluters were saying in 1970. We proved them wrong.

ODP:  What should the tragedy of COVID-19 teach us this Earth Day?

JK:  It’s a tragically teachable moment. I don’t say this in a partisan way. But the parallels are screaming at us, both positive and negative. Just think about it. This moment in life is inseparable from this moment on earth.

I think it’s made us think harder about what we do here on Earth with the time we have. It’s made more people value science, flattening the curve has given proof of concept to the fact that when lives are on the line, and people understand that their daily decisions are connected to the lives of others, people everywhere will mobilize.

But what any of us wouldn’t give to turn back the clocks to December and mobilize earlier before tens of thousands of lives were shattered. We had the facts. We had the warnings. We even had the playbook to respond.

Doesn’t that sound familiar? That’s the story of climate change. Progress has been halted by finger-pointing, denial, replacing real science with junk science, misinformation, and flat-out lies, elevating political hacks instead of scientists and experts, refusal to work with allies and even adversaries, and leaving states and cities to fend for themselves.

Sound familiar? It’s no coincidence that the same president who called COVID-19 a “Democratic hoax” referred to climate change as a “hoax from China.”

But there’s a story of hope in the climate crisis that is the opposite of what you have to do to stop the spread of COVID-19. You had to basically shut down much of the economy to stop this disease. On climate, it’s not a choice between economic recovery and climate action; solving the climate crisis is the engine of our economic future, period. That’s the great part of it: we end up healthier and create more jobs. We just have to get going.

JK:  How about, just to be alive for it for starters? There are so many ways to answer that question. I have nothing but optimism about the generation that’s rising up today and will be the custodians of Earth Day in the future. Their zeal, their determination – it gives me a lot of confidence that they’ll join us now to make sure generations come together in the next nine or ten critical years to make the decisions so that by 2070, maybe the best outcome would be that Earth Day puts itself out of business because we actually get the job done. I’m confident Joe Biden is going to be the climate president if we all do our jobs to help him win this year. Imagine what a post-carbon economy could look like by 2070. Imagine the clean water, the air that’s actually clean, a healthier country, and the jobs that come with it.

I’d hope that in 2070, people are looking back and saying “wow – we had a clean energy revolution that started in 2021, so we didn’t have dirty air the way they did back then.” And the truth is, there’s always going to be a responsibility to pay it forward. Remember the Saudi oil minister who said: “the stone age didn’t end because they ran out of stones and the oil age won’t end because we ran out of oil.” Every generation has to help find a better way to power our planet. The other day, I was on Zoom reading my grandkids a book – Dr. Seuss’s The Lorax. I used to read it to my daughters when they were kids. I suppose people are still reading it because the message is pretty timeless: you come to those lines at the end, and they stick with you – “UNLESS someone like you cares a whole awful lot, nothing is going to get better. It’s not.” Pretty good lesson. There’s always going to be something we can do, each of us. So, I hope we’re marking this day fifty years from now to remind everyone of what we can do together, and, alternatively, what can happen unless we do.

Thank you, Secretary Kerry, for all you are doing to combat the climate crisis.  You can watch Secretary Kerry at 11:00 AM ET today in a Washington Post Live Event.  Just click here.

Interview of the Week: Adam Kolton of the Alaska Wilderness League

This week we had the pleasure of sitting with Luhut Binsar Pandjaitan, Indonesia’s Coordinating Minister for Maritime Affairs and Investment, a title he’s held since October 2019. We asked the minister about how Indonesia is balancing the precarious equation of conserving its rich biodiversity while addressing the duel climate and COVID crises.   Now that […]

One Cool Thing: A Property Bro on a Power Trip


Sure he may perennially be one of People Magazine’s sexiest men alive (well Michael B. Jordon won this year), but now HGTV’s Jonathan Scott is on a real “Power Trip.”   On Monday he premiered on PBS a new documentary he wrote and directed about how solar energy development is being stifled by what he calls […]