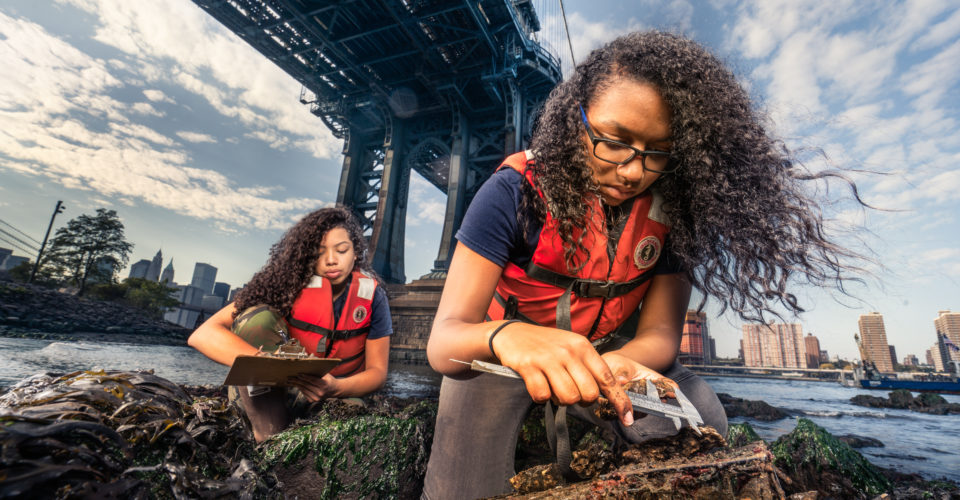 Living shorelines (as opposed to concrete seawalls) have proven to be one of the best buffers against rising seas and storm surges in coastal communities. One of the best ways to naturally buffer shorelines is to build oyster reefs and in New York City, a city-wide effort to grow oysters is successfully helping to protect New York Harbor.

The Billion Oyster Project is one of the most ambitious — a table-to-farm strategy backed by nearly $4 million in state and federal funding from the 2012 Superstorm Sandy.

That’s Not All: Student volunteers help sort the oysters while getting the chance to learn about conservation and marine stewardship.

How to Scale: Living shorelines projects are often funded through government funds but also through public-private partnerships. This past summer, Congressman Frank Pallone (NJ-06) introduced the Living Shorelines Act, a bill that includes robust funding that would authorize nearly $50 million a year for NOAA to assist with the creation of living shorelines. While the bill hasn’t been voted on yet in the House of Representatives it’s the sort of legislation that would expand climate preparedness projects that have bipartisan support.

Why This Matters: Oyster reef restoration is a popular and cost-effective way to rebuild coastlines from California to the Gulf of Mexico and beyond. Additionally, there’s usually substantial bipartisan support for these types of projects among voters in coastal states. This is good policy that more lawmakers should support as it creates jobs as well as positive outcomes for communities threatened by coastal flooding. Interestingly enough, restoring coastlines to make them more resilient was not outlined in the Green New Deal framework, an omission that many oceans experts were quick to point out as the “Big Blue Gap.”

Ocean Activists Planning to “Flood” the Nation’s Capital Next Week

Hundreds of citizens will fan out across the nation’s capital next week to meet with lawmakers in what’s projected to be the largest ocean lobby effort in US history.  On Tuesday and Wednesday, they will meet with Biden administration officials, federal agencies, and members of Congress for a nonpartisan Ocean Climate Action Hill Day.

Why It Matters:  As the Biden administration and the Congress begin to debate what’s infrastructure and therefore within the American Jobs Plan, the blue economy needs to be front and center in it.

The Evergiven is no longer stuck in the Suez Canal, but world shipping is hardly back to normal. In just six days, the massive container ship held up almost $60 billion in global trade.  Supply chains across the world are delayed and off schedule, and the incident has economists and maritime experts across the globe reevaluating the efficacy of the current shipping economy.

Why this Matters: The pandemic has rocketed demand for goods (and vaccines) to all-time highs, but bottlenecks at many major ports and slow shipping speed could slow the global economy just as it begins to recover from COVID-19.

One Hot Thing: “Seaspiracy” — An Ocean Documentary Is a Top Ten Netflix Film


This explosive new documentary film about the fragile state of the ocean is grabbing attention – it even made the British edition of Vogue Magazine.  In the last week since its release, it has vaulted into the top ten most-streamed films on Netflix.  It has also caused quite a stir — you can read more […]