Sacred Land in Arizona Under Threat from Foreign Mining Company 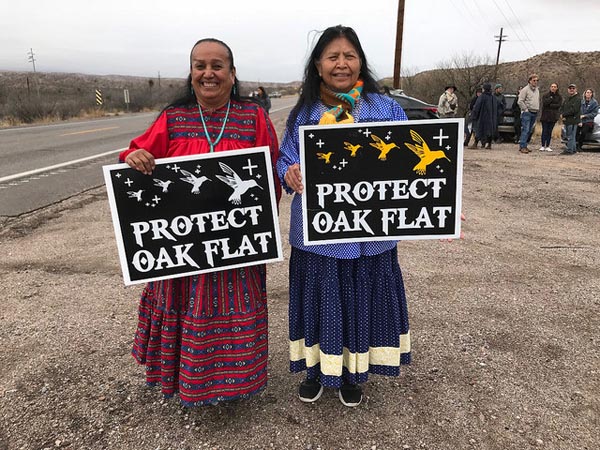 Yesterday was Arizona’s primary election and while Joe Biden made headlines for his big win, there’s another story that’s gone largely underreported in the Grand Canyon State.

Oak Flat, a sacred site for the Apache People, is under threat from a foreign mining company after it was given permission to perform mining operations on the site in 2014. The mining company, Resolution Copper (a subsidiary of Rio Tinto and BHPBilliton), hopes to build the largest and deepest copper mine in America under this site, which would disrupt local ecology and threaten water sources for years to come.

According to the Sierra Club, the project threatens to “destroy 16,000 acres of public and private land and would use more water than the City of Tempe, Arizona.” In a state where climate change is already putting immense pressure on water resources, this project would accelerate these threats as well as threaten sacred Indigenous land.

Why This Matters: For the entire history of the United States, our government has ignored the rights and needs of Indigenous communities. We’ve seen in the past year that Native Americans tribes were not consulted as the Trump administration made its plans to build the border wall–a move that would damage the Tohono O’odham Nation’s sacred sites. What we’ve failed to realize in the past is that the interests of Native Americans tribes are usually also in the best interest of our planet, namely, preserving nature, conserving water, and protecting species. We can’t undo the past, but we can (and must!) do better in the future.

A Threat to Indigenous Heritage: The Resolution Copper project would threaten 2,400 acres of land still used by the Apache People, hikers, campers, birdwatchers, and others today. Oak Flat is a sacred site for the Apache people’s origin story, where a coming-of-age ceremony was held for young women of the tribe, and plants are still collected for medical purposes. “The mine would create a crater between 800 and 1,100 feet deep and 1.8 miles across,” Representative Ruben Gallego (D-AZ) stated at a hearing for the Subcommittee for Indigenous Peoples of the United States. “That’s about twice as deep as the Washington Monument is tall and as long as the distance between the U.S. Capitol and the Lincoln Memorial.”

The Hope Factor: Congress was unable to pass legislation solely on the topic of Oak Flat land exchange. So instead the final proposal was “tucked hundreds of pages into the National Defense Authorization Act – a must-pass piece of legislation that funds our services” according to EarthWorks. Though this gave corporations the opportunity to move in to take over the land, there still hope to stop the land transfer.

An Environmental Impact Statement (EIS) must be completed first. This means that the U.S. Forest Service must conduct a thorough investigation of the detrimental effects this mining practice could have on local ecologies; a process that may take many years. Though the Forest Service has already proposed a rough draft of the EIS, giving their approval to the project, local leaders refuse to give up the fight.

Groups of scientists, tribal members, grassroots organizations, and more have taken the fight to Capitol Hill. These groups have attended committee hearing and have called on Congress to pass legislation to protect the land. Congressman Raúl Grijalva (D-AZ) and Senator Bernie Sanders (I-VT) have proposed “Save Oak Flat” bills (H.R.665 and S. 173), which would repeal the legislation that allowed for the land exchange.

What You Can Do: If your member of Congress sits on the Natural Resources Committee, please contact them and ask them to support H.R. 665 and S. 173.

In the runup to the election next week, we talked with Jean-Luc Duvall, who is a climate organizer with the League of Conservation Voters in North Carolina.  In his spare time, Jean-Luc is running for a local office in his home of Wake County.  Here are a few of the highlights.

Hero of the Week: Catherine Flowers

Catherine Flowers is an environmental justice advocate in Lowndes County, Ala., where she began her advocacy work after watching raw sewage leak into the yards of poor residents who lacked access to a municipal sewer system. Lowdnes County is one of the ten poorest counties in Alabama’s Black Belt–a part of the United States where […]

This week we talked with Justin Onwenu, a Sierra Club community organizer in Detroit working on environmental justice and the COVID-19 pandemic.  Justin is a member of Michigan Governor Whitmer’s Environmental Justice Advisory Task Force and the Democratic National Committee’s Council on the Environment and Climate Crisis.  Here are some of the highlights. On Environmental […]