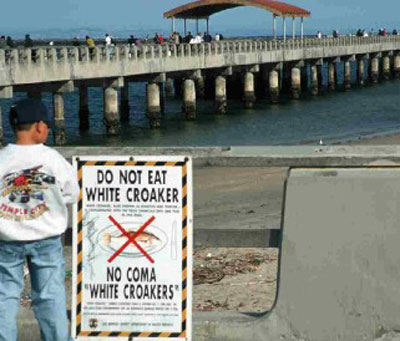 Using underwater robots that can travel more than half a mile down, a research team from the University of California at Santa Barbara recently uncovered new evidence on the ocean floor of thousands of drums full of the notorious pesticide DDT, which has been banned in the U.S. for decades.  The Los Angeles Times’ Rosanna Xia chronicles the discovery by scientist David Valentine, who was chasing a hunch off the coast of Santa Catalina Island and found the barrels bubbling — leaking highly concentrated and toxic DDT where they were dumped decades ago by Montrose Chemical Corporation.  The company became notorious for dumping DDT in the near offshore of Palos Verdes through sewage pipes — the Superfund site was well known.  But no one knew for certain about the dumping by ships into the deeper ocean until now.

Why This Matters:  Xia’s top-notch reporting reveals that there could be half a million barrels of DDT on the ocean floor — still contaminating marine life.  DDT is the pesticide that first rang alarm bells thanks to Rachel Carson’s 1962 book Silent Spring sparked a movement.  DDT was the original “forever” toxic chemical.  And unfortunately, it’s a toxin that stays in the tissues of animals in greater and greater concentrations as it moves up the food chain.

Ocean Dumping Was Commonplace Decades Ago

The extent to which dumping took place would shock people today.  And yet, decades ago, people thought dropping things into the ocean was a relatively safe alternative as compared to burning DDT or putting it in landfills that had limited storage capacity.  According to Xia, “Dumping industrial chemicals near Catalina was an accepted practice for decades…Explosives, oil refinery waste, trash, and rotting meats all went into the ocean, along with beryllium, various acid sludges, even cyanide.”  Finally, in 1972, Congress passed the Ocean Dumping Act, and that’s when the practice started to end.  While the nearshore dumping of DDT became a highly contentious and ugly Superfund battle, the dumping of the drums went basically unnoticed for decades.  The Superfund site was one of the most complicated ever because located 2 miles offshore and 200 feet deep, it was three times deeper than similar Superfund sites in Boston and New York harbors. Eventually, the case settled with Montrose paying $140 M for cleanup.

The ocean drums haunted some scientists who had an inkling they were out there.  Then along came the UCSB researchers with their deep-sea robot who stumbled on the leaking barrels and grabbed some sediment samples. They also took photos and those made it clear the toxic ooze was spreading from the barrels.  The scientists determined based on the samples that the form of DDT they found at depth was different than that found in the Superfund site — so it had not traveled there — it had to have been dumped.  The area around the Superfund site is starting to come back.  But this new site is just coming into focus and scientists worry that they will continue to have to clean up messes like this one in the ocean.  Another prominent researcher put it this way,  “These chemicals are still out there, and we haven’t figured out what to do,” he said. “They are an issue, and we still don’t have a plan.”  The Times contacted Montrose about the story but “they declined to comment on the new underwater data and noted that the ocean claims related to the DDT operation were resolved 20 years ago.”

To Go Deeper: The entire LA Times story and its photos are worth your time.