Scientists Speak Out for Climate Action 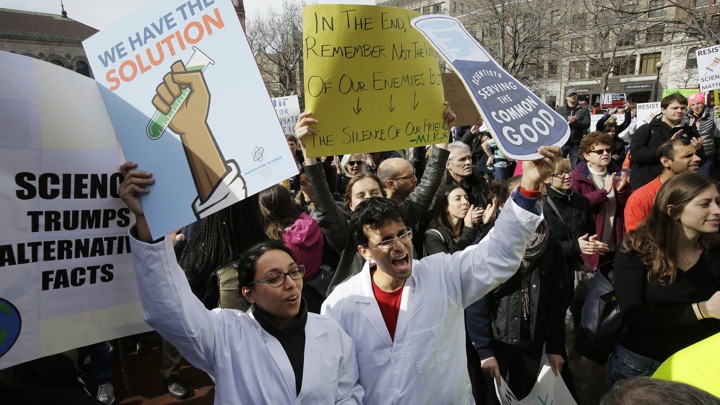 Historically, scientists have gone out of their way not to make political statements. After all, their job is to provide facts, not suggest policy prescriptions that can often be complicated to implement.

But now, a growing number of climate scientists are deciding to buck tradition and speak up for the urgency of climate action. As scientist Steve Ghan told the LA Times, “We naively thought, ‘Well, OK, we’ve done our job, now the politicians are going to make decisions. But that’s not the way it worked.”

Driven by the lack of climate action, they are marching in the streets, signing on to manifestos and even getting arrested — all in the name of avoiding the worst effects of global warming.

The History of Scientists Activism: The LA Times explained that scientists’ aversion to activism dates all the way back to the philosopher David Hume, who in 1739 argued that one could not get an ought from an is. In other words, facts alone can never tell us what we should do.

Researchers have understood for more than 40 years that human activities such as burning fossil fuels were heating the planet. But only a handful spoke out about the consequences. That’s changing as scientists are beginning to see climate issues become irrationally politicized–the truth needs to be heard by all.

A Striking Spirit: Scientist activism broke into the mainstream during the 2017 March for Science. The event called for many things but in essence, asked people to believe in and value science.

Why This Matters: Not only have scientists been marching and calling for action themselves, but they’ve been encouraging of their students joining climate strikes as well. Prominent climate scientists like Texas Tech’s Katharine Hayhoe have started using their platforms to inform and encourage people to talk about science and for lawmakers to take action (Hayhoe even has a TED Talk about how to talk to anyone about climate change). As Helen Amanda Fricker, a glaciologist at the Scripps Institution of Oceanography in San Diego put it, “If we aren’t the ones to speak up about it, then who will?”

After heavy seasonal rains late last month and in early September, in Sudan, the White Nile and the Blue Nile, its main tributary, have flooded, causing the death of over 100 people and the damage of over 100,000 homes, leaving hundreds of thousands homeless.

Why this matters:  Climate change-related flooding is devastating the country. More than 500,000 people have been affected in 17 of the country’s 18 states.

China’s Surprise Commitment to Be Carbon Neutral by 2060

Yesterday at the annual meeting of the United Nations General Assembly, Chinese President Xi Jinping pledged to achieve “carbon neutrality before 2060” with the aim of hitting peak emissions before 2030. China had choice words for the Trump administration and its complete lack of international leadership on climate change action. Chinese foreign ministry spokesman Wang […]

Why this matters: While the wealthiest indulge in luxuries that contribute more to climate change, a federal report found that the poor will be among the earliest victims of climate crises and will be impacted the most.