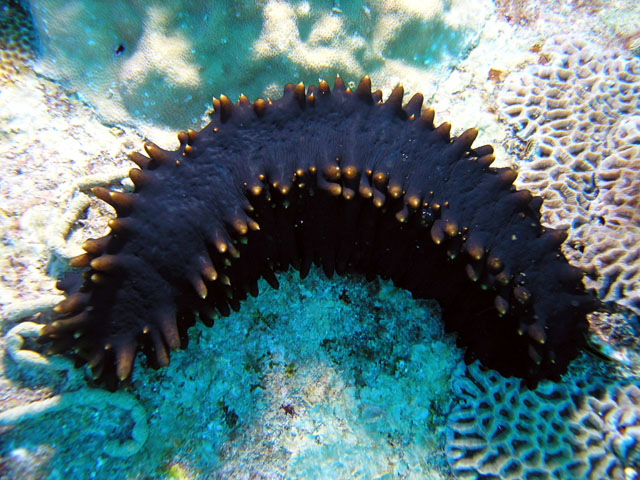 The latest victim of the endangered animal trade is the sea cucumber. These creatures, often the butt of jokes due to their suggestive shape and silly name, have been growing in value for over a decade, and have now been aggressively overfished. Sea cucumbers play a crucial role in their ecosystems and the overall health of oceans, but illegal fishing practices are stealing these slimy echinoderms, as well as valuable income, from local communities in Sri Lanka and Southern India.

Why This Matters: Sea cucumbers are bottom-feeders—pause for laughter—and feed on detritus on the ocean floor, recycling nutrients and producing important ingredients for coral reefs like nitrogen, ammonia, and calcium carbonate. Their digestive processes also help counter ocean acidification, a process by which high carbon dioxide levels in the ocean change its overall pH, damaging wildlife, coral reefs, and the water’s own ability to absorb atmospheric carbon.

Overfished, under-appreciated: Sea cucumbers are valued as ingredients in luxury cuisine, particularly in China and parts of East Asia.

India has entirely banned the fishing and trade of sea cucumbers, but Sri Lanka has not. “If you have a legal market in that kind of way in proximity to an illegal market, the legal market becomes a huge source for fish laundering,” says Teale Phelps Bondaroff, director of research at OceansAsia.

Sea cucumbers are often fished in Indian waters and smuggled into Sri Lanka, where they are then legally exported to other countries. But as populations declined in these waters, illegal fishing operations have spread to new regions, in particular, the Lakshadweep union territory, an archipelago off the southwest coast of India. Sajan John, head of policy and marine projects at the Wildlife Trust of India, explained, “resource depletion could be a major reason why these people are searching for new grounds. Lakshadweep is much more pristine, so that may be the reason why traders are moving there.”

Enabling Protections: To combat these new operations, the world’s first conservation area for sea cucumbers was set up in February 2020, accompanied by anti-poaching bases and a sea cucumber protection task force backed by India’s Central Bureau of Investigation.

Experts say that protecting these creatures is crucial to the health of the ocean and the people who have fished these waters for centuries.

“The people of Lakshadweep understood the importance of sea cucumbers because their livelihood is largely depending on fisheries,” said Sivakumar Kuppusamy, a scientist at the Wildlife Institute of India. “When sea cucumbers are affected, other fisheries are affected.” Kuppusamy says that the best way to combat illegal fishing is to convince the fisherman that they’re acting against their interest. “That’s when they start to realize their livelihoods and their kids’ future will be affected,” he said. “Breaking that [illegal supply] chain and convincing the fishermen – we have to do both. Otherwise, this trade will continuously grow.”