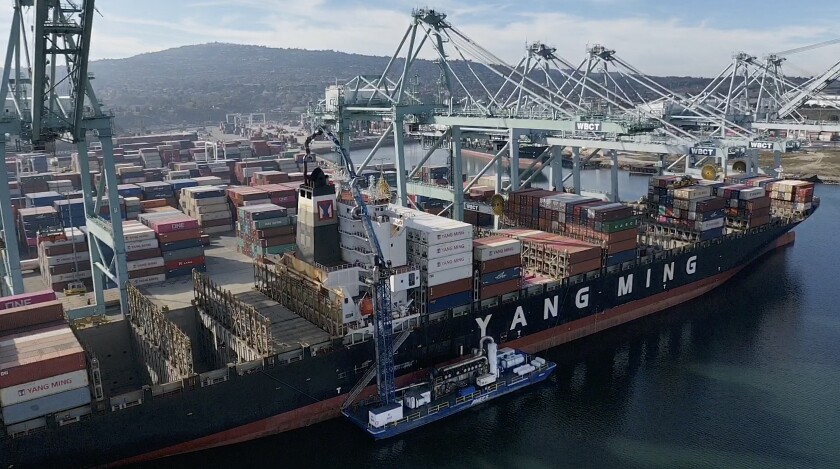 Ships visiting Southern California’s bustling ports are poised to become the region’s largest source of smog-causing pollutants in the coming years and the California Air Resources Board (CARB) wants to tackle this looming problem. However, as the LA Times reported, residents who live near the ports and are most affected by the toxic pollution worry that regulators are not moving fast enough and that shipping companies will flex their political might to weaken proposed regulations. (A fear that’s not unwarranted)

What’s Being Proposed: Air quality officials want to expand the number of ships that, while docked, must either shut down their auxiliary engines and plug into shore power or scrub their exhaust by hooking up to machines known as bonnets or “socks on a stack.”

CARB Clean Air Plan: This past December the CARB  voted to approve an updated plan for the South Coast Air Basin aimed at further cutting smog-forming emissions (like from ships). These rules would be the most stringent in the nation and the state predicts big improvements in health and air quality from strengthening the rules. As the LA Times explained, by 2031, the rules are expected to slash emissions of diesel particulate matter and nitrogen oxides from docked ships by about half and reduce their contribution to cancer risk around the ports of Los Angeles and Long Beach by 55% over the same period.

Why This Matters: International shipping is a large and growing source of global emissions–responsible for about 2.5% of global greenhouse gas emissions. Decarbonizing this sector will come with immense challenges but we need to take steps right now to steer the industry in the right direction. While the world’s largest shipping company, Maersk, has made a commitment to carbon neutrality by 2050, it will take government carrots and sticks to attain true decarbonization.

This will also require nations working together to ensure that ports around the world all hold companies to emissions reductions standards. Right now some shipping companies are willfully not complying with CA’s standards and opting to pay penalties because their ships don’t often dock at those ports.

CNN and The Guardian reported late last week on a new study published in the journal Nature that concludes that methane emissions from fossil fuels are between 25% and 40% larger than past research had estimated, which means that oil and gas production is contributing roughly half of all greenhouse gas emissions — “far more” to climate change than previously estimated.

Why This Matters:  Methane is about 80 times more potent than carbon dioxide when looked at over a 20-year period.

Fossil Fuels Cost the US Economy Billions According to Greenpeace Report

According to a new report from Greenpeace Southeast Asia and the Centre for Research on Energy and Clean Air, air pollution that’s generated by burning fossil fuels is responsible for approximately 4.5 million premature deaths worldwide every year. The report underscored that, Air pollution increases the incidence of chronic and acute illnesses and contributes to […]

In 2018, nearly 110 million Americans lived in areas with air quality that was unhealthy for more than 100 days of the year, according to a new report published on Tuesday by Environment America Research & Policy Center, USPIRG Education Fund and Frontier Group.

Why This Matters:  Dirty air negatively impacts’ people’s health and even their life expectancy — as we have often reported here in Our Daily Planet, and air quality in the U.S. is not good enough, despite what the current administration may try to claim.