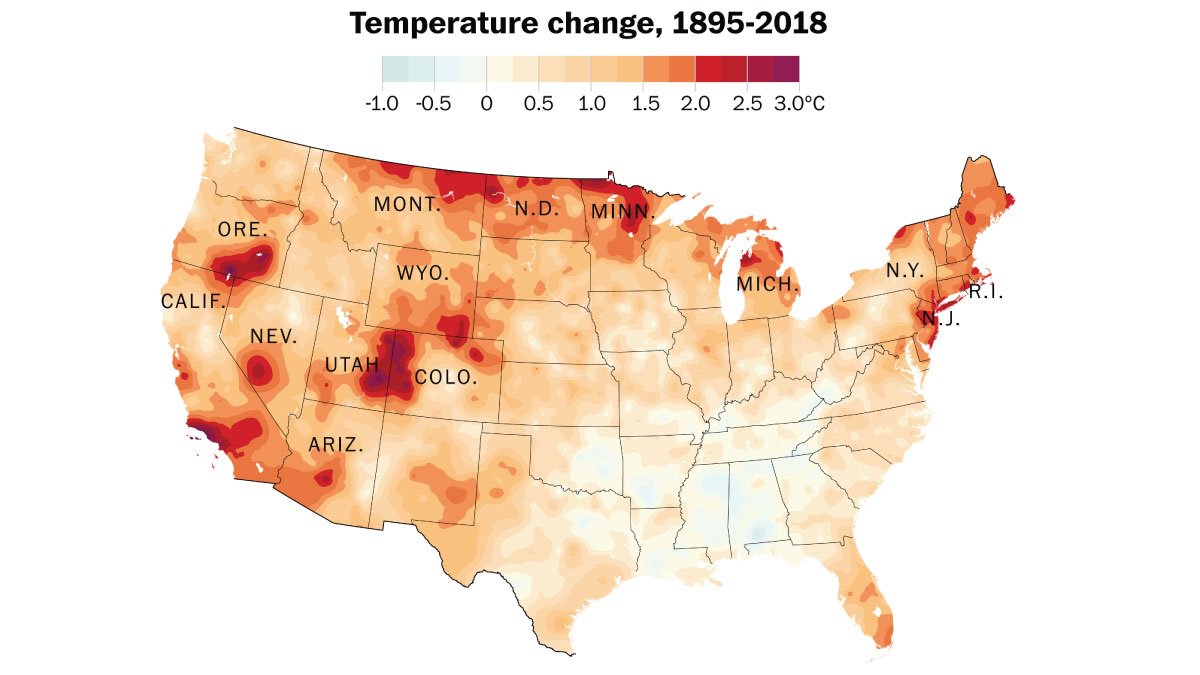 Yesterday, the Washington Post launched the first in a series of stories about places in the United States that have, as the Post’s climate reporter Chris Mooney explained,  warmed by nearly or above 2 degrees Celsius, or 3.6 Fahrenheit – roughly double the global and U.S. (lower 48 state) average. The Post analyzed more than a century of NOAA temperature data across the Lower 48 states and 3,107 counties and identified the hotspots that are experiencing the worst of climate change and often feeling the drastic effects already.

It’s not necessarily the summer highs, it’s the upward trending winter lows that contribute to average warming. Higher winter temperatures have made New Jersey and Rhode Island the fastest warming of the Lower 48 states. The Post explained that the threshold, reached over the past three decades, has meant lakes don’t freeze as often, snow melts more quickly, and insects and pests don’t die as they once did in the harsher cold. David A. Robinson, New Jersey state climatologist and professor at Rutgers University’s department of geography pointed out that the freezing point “is the most critical threshold among all temperatures.”

An Interesting Stat: The only part of the United States that has not warmed significantly since the late 1800s is the South, especially Mississippi and Alabama, where data in some cases shows modest cooling. However, as we’ve seen from this past week in the Central and Southern U.S., climate change can amplify even modest heatwaves and make them unbearable.

Why This Matters: This reporting from the Washington Post is an in-depth look at vulnerable regions of the United State. While 2 degrees Celsius may not sound like a lot, it can threaten entire ecosystems and put local economies at risk. These 2-degree hotspots serve as indicators of what’s to come and how climate change will further affect entire regions. Daniel Pauly, a marine scientist at the University of British Columbia explained that “these hot spots are chunks of the future in the present.”

By Natasha Lasky, ODP Staff Writer While coal use is a leading source of greenhouse gas emissions, another industry is set to outpace it: plastic. A new report from Bennington College and Beyond Plastics estimates the plastic industry emits over 232 million tons of greenhouse gases each year, the equivalent of 116 coal-fired power plants.  […]