Watching Tiger King? Here’s what you should know (and how you can help) 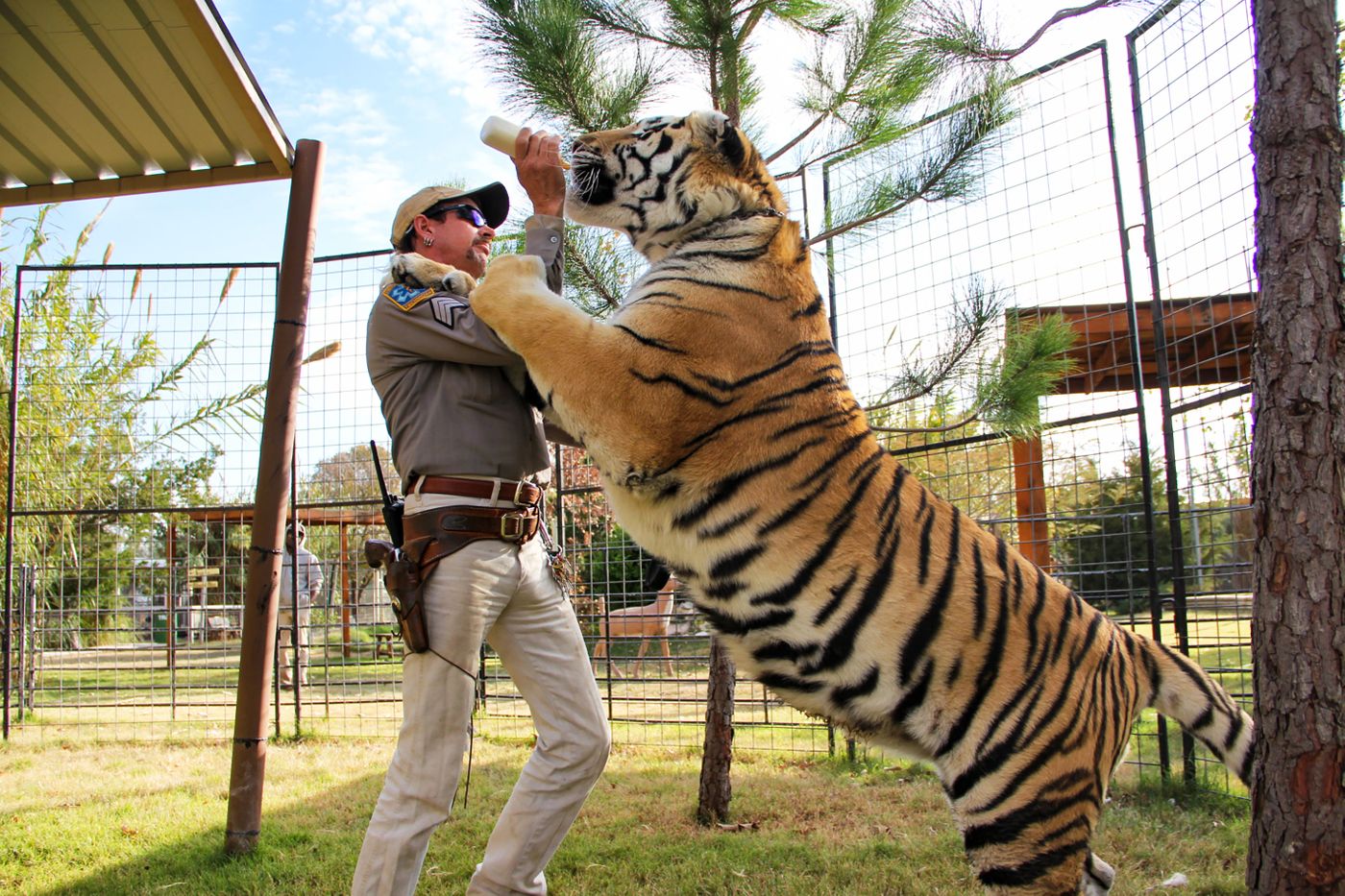 By: Carson Barylak, IFAW Programs Manager and Meredith Whitney, IFAW Wildlife Rescue Program Officer.  This blog first appeared on the IFAW web site and is reprinted with their permission.

While entertaining, it also shines an important spotlight on a problem far too few of us know about: the tragic and dangerous way big cats are bred, traded, and mistreated in the U.S.

You may recall the reference to the shocking fact that more tigers are believed to live in cages across the U.S. than remain in the wild worldwide. But how? Well, remember the tiny tiger cubs that you saw in the series—they bring in cash for unscrupulous businesses like some seen in the show. Torn from their mothers soon after birth, these young cubs are used as photo props and for pay-to-play “cub petting” encounters. But they do not stay small for long, so the animals are speed-bred to keep the supply of newborns coming, with no regard or planning for the animals’ long-term care. The mothers and cubs suffer a great deal at every stage of this process. And when cubs outgrow profitability for this purpose, they are treated as disposable. Sadly, the roadside menageries and breeders who promote cub handling mislead consumers into believing that this cycle of misery is somehow good for the animals or for conservation.

For many years, we have been watching this very real saga unfold behind the scenes. IFAW is committed to ending the exploitation of captive wild cats and has been since our first rescue of 24 tigers in 2003. Since then, we’ve rescued an additional 150 big cats from inhumane conditions. We hope that someday there will be no need for such rescues and are working hard to advance policies to address the U.S. trade in captive big cats.

The word “sanctuary” was used a lot in the series. What’s not discussed is the importance of that term. True sanctuaries do not breed, allow public contact with, sell, or otherwise exploit the animals that they take in. Big Cat Rescue is a true sanctuary, independently accredited by the Global Federation of Animal Sanctuaries (GFAS), and works to end exploitation. Animals in true sanctuaries have found their forever homes and their well-being and your safety are the top priorities. Roadside menageries and breeding operations, sadly, often call themselves “sanctuaries,” when they are in fact perpetuating the inhumane, dangerous trade in captive big cats—creating the very problems that true sanctuaries are trying to solve. (You can learn more about identifying true sanctuaries here.)

Fortunately, true sanctuaries are joining forces to end the cruelty. IFAW brought members of the legitimate sanctuary community together to create the Big Cat Sanctuary Alliance (BCSA). The BCSA enables true sanctuaries and their partners to speak with one voice as they advocate for positive change, while encouraging collaboration and sharing best practices. Just last month we partnered with a BCSA sanctuary, Turpentine Creek Wildlife Refuge, to rescue two tigers, originally bred in Joe Exotic’s “zoo”, from private owners in Oklahoma who were running a ramshackle ‘zoo’ in their own backyard. And in 2018, we worked with multiple true sanctuaries to relocate and care for animals from a roadside zoo in Colorado that housed over 100 big cats in cramped and inhumane conditions.  This facility was a breeding center where cats too old for petting and deemed to have no further “economic value” were warehoused in small cages without doors – meaning their cages could never be cleaned and the cats would never receive veterinary treatment, no matter their condition.

Sadly, big cats that are born and raised in these kinds of facilities cannot be released into the wild as they aren’t equipped to survive. So true sanctuaries do all they can to give them the best enclosures, veterinary treatment, food, enrichment, and care possible. Ultimately, we hope to see an end to the big cat trade and, thus, the need for sanctuaries. But as we work together toward that goal, rescuers continue their tireless efforts to provide better lives for big cats saved from unqualified owners.

Remember that the U.S. tiger trade isn’t just bad for the cats—it’s also risky, and sometimes deadly, for people. What didn’t receive attention in the series is the serious public safety threats associated with the big cat trade. In parts of the U.S., tigers and other big cats can be kept as pets, and in many states and cities, no one tracks where these animals are kept. First responders never know the dangers that could be lurking in a backyard or basement when they arrive at a scene. And in the case of disasters like tornadoes or hurricanes, big cats could be unintentionally released, making a dangerous situation worse. This was the case in a small community in Texas in 2016 when a tiger was found wandering the streets after escaping from an unsecured yard where she was hastily placed to protect her from flooding. Luckily, no one was injured, but that may not be the case next time. There have been hundreds of dangerous and deadly incidents across the United States and, unless we better regulate the trade in deadly exotic cats, the tragedies will undoubtedly continue.

Fortunately, emergency responders are working alongside true sanctuaries and wildlife advocates to rein in the dangerous big cat trade. In fact, the National Sheriffs’ Association has endorsed federal legislation—the Big Cat Public Safety Act (BCPSA)—to do just that. This important bipartisan legislation limits private ownership of big cats and puts a stop to cub handling. It’s a key priority for IFAW and we hope YOU will help us get it passed.

Here’s what you can do:

We and our dedicated partners are proud to do our part in helping to save these incredible animals from inhumane and unsafe conditions, but big cats need your help too.

So enjoy the entertainment while you binge-watch (we all need a little distraction during these difficult times), but don’t forget that beneath the human drama is very real and widespread animal suffering. Join us in putting a stop to it.

Publisher’s Note: I (Monica) first encountered the shocking issues surrounding big cats in captivity and lax public safety regulation in 2005 when I worked at IFAW and we were asked to assist with legislation after Haley Hilderbrand, a Kansas teen, was killed while having her senior picture taken with a Siberian tiger at the Lost Creek Animal Sanctuary.  It made national news and Congress in 2007 passed the Captive Wildlife Safety Act to address the problem.  But the restrictions that law put in place are not sufficient, as the series “Tiger King” makes abundantly clear.  On Monday, U.S. Representative Mike Quigley (@mikequigley) is planning a tweetstorm to garner support for the Big Cat Public Safety Act, which revises restrictions on the possession and exhibition of big cats, including to restrict direct contact between the public and big cats.