We Ask Tom Steyer, Is There Room To Talk Impeachment and Climate? 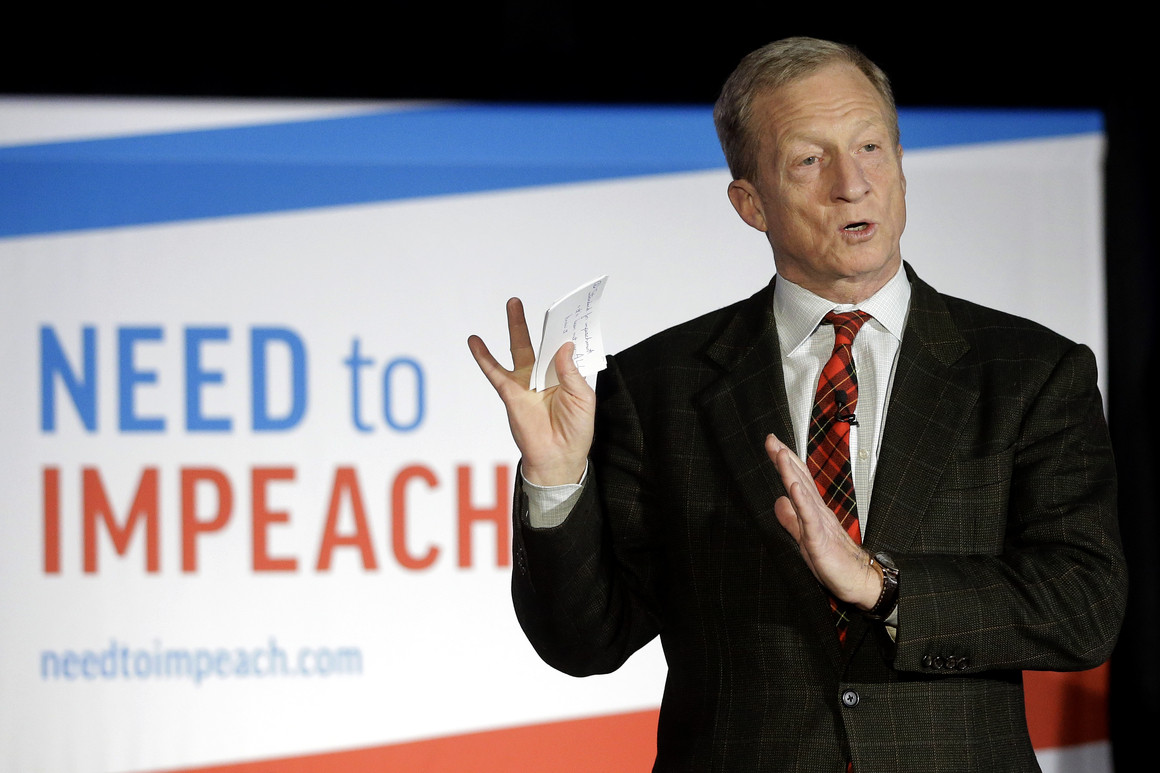 If you’ve taken a look at a newspaper or turned on cable news in the past month it’s difficult to spot a headline that doesn’t have to do with impeachment. Sure, impeachment is an important issue but cable news, in particular, has honed in so profoundly on the topic that it’s left little room for coverage of other important issues like the connection of climate change to wildfires and the gutting of the Clean Water Act.
We decided to ask presidential candidate Tom Steyer about how we balance impeachment with the imminent issue of the climate crisis as Steyer as long championed both impeachment and a bold environmental agenda. Keep reading for our interview.
ODP: You’ve been a vocal proponent of impeachment, do you think the media is overdoing it with coverage of impeachment at the expense of other important issues like the connection of climate change to the CA wildfires?

TS: It’s hard to imagine that the impeachment of the most powerful man in the world as it goes on tv as an actual live show isn’t going to soak up the oxygen. Do I think that means we can’t also talk about other critical issues? No. But do I think that as long as impeachment is going on it’s going to be, you know, the reality show to end all reality shows? I really do. And I’ve always said that it’s going to be must-see t.v. just as the Watergate hearings were. Because you’re talking about the trial of the most powerful man in the world, in real-time and with huge consequences for the planet. So if you care about the planet, here’s the biggest enemy of sustainability and our future on trial. It’s hard to take your eyes away.

It’s not a fluke that someone who has committed all of these high crimes and misdemeanors while he’s been president has also been the most anti-environment president in history. His willingness to transgress the laws of the United States and the laws of nature apparently know no bounds.

ODP: Coverage of climate issues on major cable networks has really dipped after the climate town halls earlier this fall. There wasn’t even a single climate question at the last presidential debate. Why do think that is? Is it because most Democratic candidates have a similar position on climate?

TS: I don’t think most Democrats have a similar position on climate change. It’s just not a priority. Look, what we’re seeing is a replay of 2016 on some level. I’ve said before that climate is my number one priority and I’m the only person on that stage to say that. I’d declare [climate change] a national emergency and make it a real priority of foreign policy. There’s no one else on that stage who’s going to say that.

And so, climate has become this thing where you have to check the box, you need to sound concerned, but the reason I’m running is because I don’t think we’re leveling with the American people about the fact that corporations own the government and that we HAVE to deal with climate on an emergency, real-time basis. That’s not the debate that’s being had on the debate stage, it’s been about policy differences and policies that we can’t get done until we break the stranglehold on our government. And that’s why I’m running: we have really urgent issues and for some reason, they’re not being discussed and we just can’t have that.

ODP: As a Californian, what’s your reaction as the state continues to grapple with wildfires and continued losses of power that hit working families really hard?

TS: What we’re seeing in California is that we haven’t just had bad fires this year, we have bad fires every year. But it’s not just California, if you go to Iowa they’ve had flood after flood after flood. This is a compounding problem that we have to get ahead of. To ignore it because we haven’t seen the worst outcomes yet makes no sense. I say three things 1. We have to do it, 2. We can do it, 3. We can do it in a way that will make us better employed, creates better jobs and higher wages and we can clean up the air and water at the same time as we lead the world. Why don’t we do that, why isn’t that a great thing in terms of creating good-paying jobs and making people healthier and getting back to America being a value-driven, moral country?