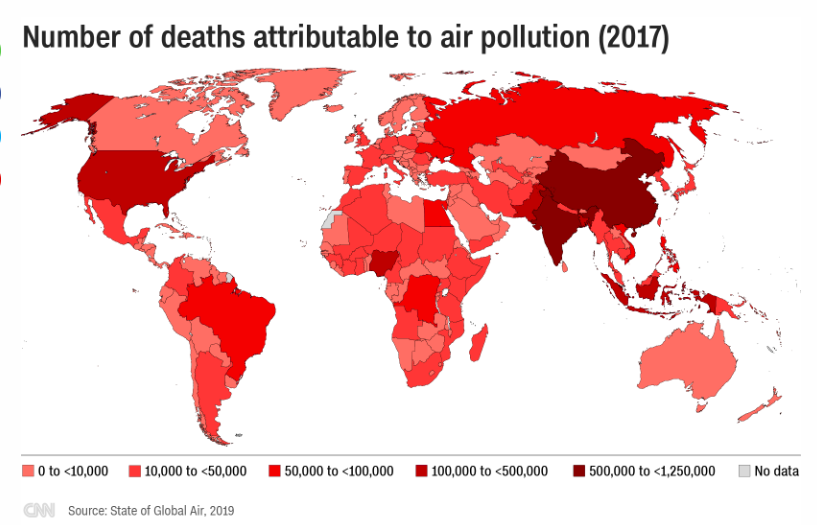 The 2019 State of Global Air (SOGA) report, released on Wednesday stated that children born today will be exposed to so much toxic air pollution over their lifetimes, that it will dramatically shorten their life expectancy. CNN reported that the study found that countries in Asia and Africa had the highest risk because they have high levels of harmful soot or particulate matter (PM 2.5) and they rely on coal-powered energy plants and regularly use fuels like charcoal for cooking.

According to the Report, “[t]he growing burden of disease from air pollution is among the major challenges facing national governments and public health officials, with far-reaching implications for national economies and human well-being.”  The United States is on the high end of air pollution deaths — with more than 100,000 in 2017.  China, on the other hand, due to strict new governmental controls, is one of the success stories of the past year — it saw a drop in PM 2.5 particulates pollution.

Why This Matters:  Why should our children live shorter lives due to air pollution?  We have the technology to control it — it is simply a matter of political will.  Air pollution costs should be born by the companies who pollute, not by the rest of us through higher health care costs, lost days at work or recreating or lost days of our lives.  On Monday we reported that Denver had worse air quality than Beijing for more than 50 days a year.  Now we know that not only is this air pollution uncomfortable, but it is also shortening our lives.  What would you do for an extra 20 months of life?  Regulations that curb air pollution often are vilified, but the truth is we need them to keep us healthy and to let us live our life to its fullest.  Not to mention that these toxic air pollutants are the same ones causing climate change.

To Go Deeper:  Read the full Report here.  And you can use an interactive tool to explore the data behind the Report here.

What You Can Do:  Join the Moms Clean Air Force and help fight air pollution in the U.S. by holding politicians and corporations accountable for reducing air pollution.