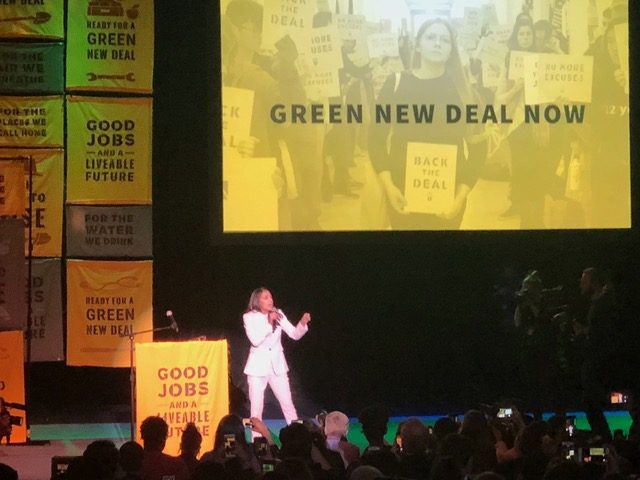 The Sunrise Movement held its biggest and highest profile event yet on its Green New Deal (GND) tour, packing the house at Howard University in Washington, with appearances by its high profile backers Representative Alexandria Ocasio Cortez and Senator Ed Markey, the original cosponsors of the GND, and Senator Bernie Sanders.  Fossil fuel companies and “conservatives in both parties who favor a middle ground” were proclaimed the enemies of the movement by speaker after speaker.  Here are some of the highlights:

Sunrise Movement Executive Director Varshini Prakash outlined the group’s demands for all 2020 Presidential candidates — that they (1) take the no fossil fuel pledge; (2) pledge to make the GND a priority on day one of their Presidency; and (3) that they agree to a debate focused entirely on climate change #Changethedebate.  Representative Alexandria Ocasio-Cortez then took the stage and began her stump speech on why the GND is a “solution on the scale of the problem” and said she finished by calling on the group “to organize for a just economy.  To organize for a just society. And to organize for a just future for America and the world.”

Why This Matters:  The Sunrise Movement is gaining strength and its voice. They know what they want – they have their list of demands ready, and they are building a political movement that should get the attention of all the Presidential contenders.  Last night’s event was sold out, and the crowd was extremely diverse — racially and with attendees of all ages not just young people.  Many were there to see Senator Sanders — his supporters seemed just as enthusiastic as they were in the 2016 primaries.  However, the big star was Representative Ocasio-Cortez, who spoke with an ease and confidence that matched Markey and Sanders.  It is clear she has a bright future in the Democratic party.  And so does the GND.  And there is no time to waste, as carbon dioxide levels last week hit their highest concentrations since humans inhabited the Earth.

To Go Deeper:  We recommend this tutorial on the GND courtesy of John Oliver.  We warn you, it’s explicit and the Bill Nye cameo is worth waiting for — or just fast forward to the final minute and enjoy his rant.