Climate change is altering how America’s favorite crops are grown 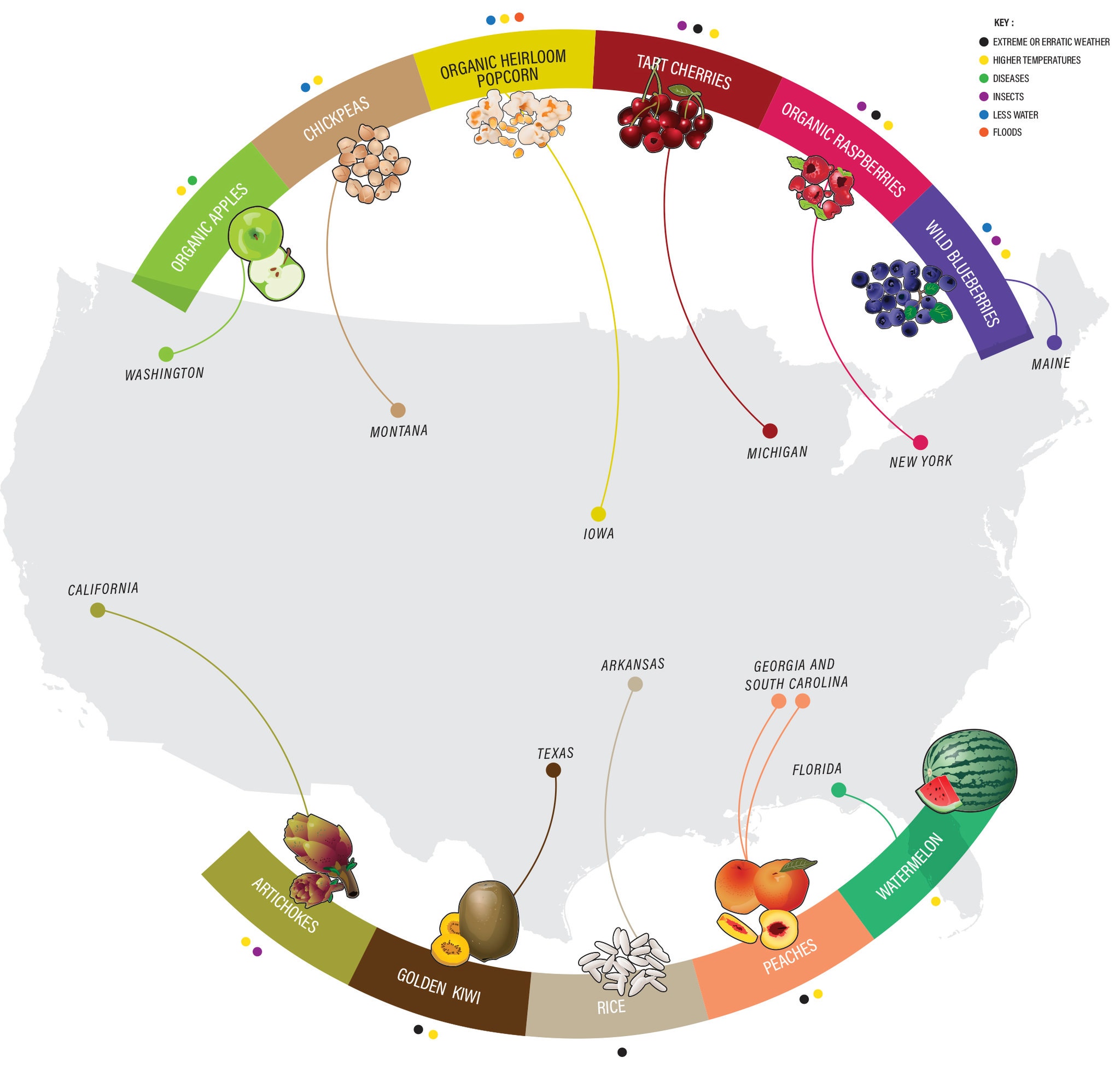 Climate change is causing parts of the United States to become more drought-prone and in other regions is altering rainfall patterns so that precipitation becomes more erratic and causes catastrophic flooding. Additionally, climate change is driving the rise in pest infestations which will mean that farmers are scrambling to keep up with rapidly changing conditions, whether or not they acknowledge climate change or not. As the New York Times reported, “Decades-long patterns of frost, heat and rain — never entirely predictable but once reliable enough — have broken down. In regions where the term climate change still meets with skepticism, some simply call the weather extreme or erratic. But most agree that something unusual is happening.” This means that some of our favorite crops will all face increased stresses that make their cultivation more challenging, if possible at all.

The Times also explained that because our nation’s agriculture system “is complex and intertwined, a two- or three-week shift in a growing season can upset supply chains, labor schedules and even the hidden mechanics of agriculture, like the routes that honeybees travel to pollinate fields. Higher temperatures and altered growing seasons are making new crops possible in places where they weren’t before, but that same heat is also hurting traditional crops. Early rains, unexpected droughts and late freezes leave farmers uncertain over what comes next.”

Some of the most popular crops that will be affected by a changing climate include organic apples, chickpeas, organic heirloom popcorn, tart cherries, organic raspberries, wild blueberries, watermelon, peaches, rice, golden kiwi, and artichokes–you can read the article to learn more about the challenges facing each crop.

This is also taking a toll on farmers and making it far more difficult for them to eke out a living. Richard Oswald, a farmer from Missouri explained to the Guardian that the farm he inherited from his father has drastically different conditions than the ones he experienced as a boy. Oswald explained that “When I was a kid, my dad would say an inch of rain was a good rain. That’s just what we needed. Now we get four inches, five inches, six inches in one sustained wet spell that lasts two or three days. I don’t ever remember that as a boy. I’ve never seen the sustained wetness in the land that we have now.”

Why This Matters: Climate change will likely drive up food prices as it becomes more expensive to grow our food. This will affect small farmers and all of us that have to buy food–especially low-income Americans who already struggle to afford healthful foods. For Americans farmers, bad growing years are becoming far more than bad luck, they’re becoming the norm–this is forcing farmers to either quit their business or consolidate.

Energy And Transportation Sectors Feel Ripple Effects of Coronavirus – Will There Be Climate Benefits?

Oil and gas producers are being impacted by the spread of COVID-19 as Conoco-Phillips has canceled the travel of hundreds of workers who shuttle up to the oil fields on the North Slope of Alaska while workers currently there work an additional week, and in North Dakota the oil and gas commission is considering banning operators from either selling more unwanted Bakken crude oil or even forcing them to abandon wells completely.

Why This Matters:  The up and down sides of the scrambled new world order are coming into focus.