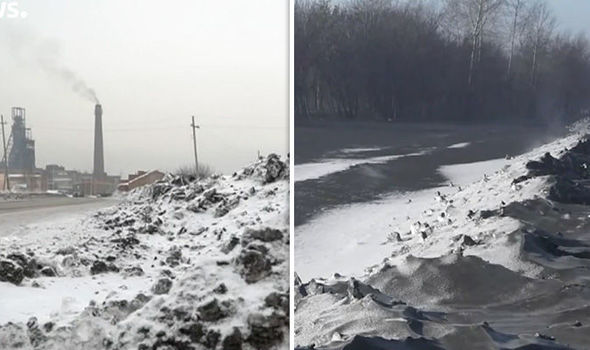 As CBS News reported, a pall of eerie black snow has covered several towns in the Siberian region of Kuzbass, which is home to 2.6 million people and one of the world’s largest coal fields. According to the Guardian and the Siberian Times, the snow is tainted with toxic black coal dust that was released into the air from open coal pits and improperly maintained factories in the region. One coal plant official told the local media that a shield meant to prevent coal powder from escaping out of the factory had malfunctioned — however, toxic black snowfall seems to be a regular phenomenon in the area and it isn’t necessarily tied to a single source.

AP also reported that local prosecutors are checking to see if the processing plant observed industry emission standards. Kemerovo regional governor Sergey Tsivilyov says authorities have tried to tackle pollution and several mines promised to resettle residents from the most polluted areas to less impacted ones.

Why This Matters: As British NGO Fern explained in a recent report, Kuzbass is the epicenter of Russia’s expanding coal industry: around 76% of Russia’s coal exports come from there, and much of it is eventually shipped to European ports and converted into energy in Europe’s power stations. All who live in the vicinity of the mines are prey to their impact. Official statistics reveal increases in tuberculosis, cardiovascular diseases, maternal and child illnesses and a shortened life expectancy and sadly, many locals’ livelihoods are dependent on the mines that are causing them such harm. According to the Siberian Customs Administration, of the top 22 destinations for Kuzbass coal, 11 are in the European Union. In fact, according to the same source, more than half of all the coal exported from there ends up in the EU, with the United Kingdom, the Netherlands, and Germany among the prime markets. What’s happening in Kuzbass is indicative of what happens in many places around the world: poor, working-class coal communities are forced to pay the price so that wealthier areas can harness the power they generate, no matter the cost.