Notice: WP_Block_Type_Registry::register was called incorrectly. Block type "core/video" is already registered. Please see Debugging in WordPress for more information. (This message was added in version 5.0.0.) in /var/www/wp-includes/functions.php on line 5664
 Democratic Candidates Get Behind the Green New Deal | Our Daily Planet

Democratic Candidates Get Behind the Green New Deal 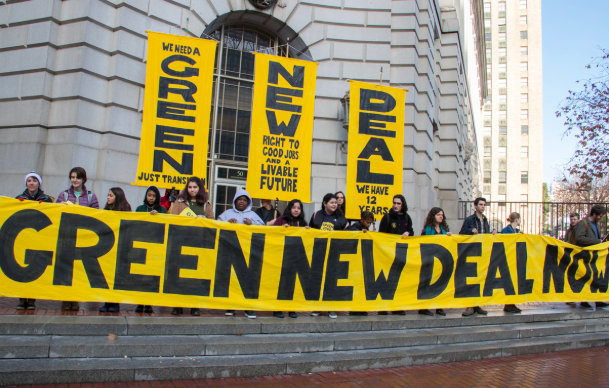 Endorsing the Green New Deal is becoming a talisman of politics in the 2020 Presidential race on the Democratic side.  The Washington Post’s Power Post pointed out that this is a policy that almost no one had heard of last November but is now one of the key planks that appears to have nearly unilateral support.

The real question is whether the Green New Deal is much more than just a campaign slogan.  Representative Alexandria Ocasio-Cortez and the Sunshine Movement who are leading the charge for it argue it must include that 100 percent of the nation’s electricity come from “clean” sources by 2030 and also a guarantee of a job for every American displaced by this policy in order to facilitate that transition.

Why This Matters:  The conversation is changing already.  To get beyond the slogan is the challenge.  How far are these candidates willing to go?  Will they try to outdo each other on the Green New Deal?  Will they all support the jobs plank?  And is 2030 realistic or just a pipe dream?  Time will tell. But for now, candidates will have to discuss and debate how far and how fast they believe a President can push the U.S. toward a fossil-free future.

To Go Deeper:  For what might be in the details of a Green New Deal, we recommend this two-part series from Greentech Media.