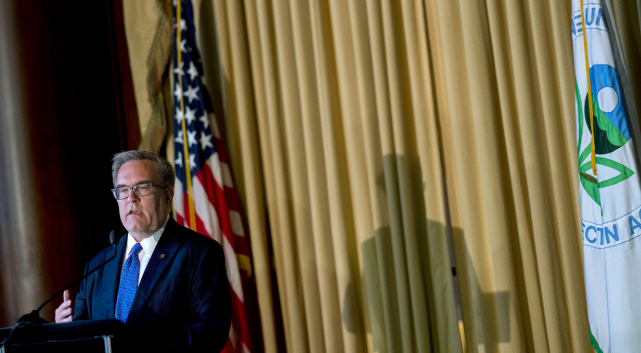 With the nomination of Andrew Wheeler to lead the Environmental Protection Agency now before the Senate, and David Bernhardt likely to ‘act” for many months and then be nominated as Secretary of Interior, these two agencies are poised to “make the most” of the next two years of the Trump Presidency. As former Deputies of their respective agencies, they have the contacts, the inside-baseball knowhow, and the drive to achieve much more than their high profile former bosses.

The Trump Administration has shaken up Washington, and ignored or broken many of the city’s traditional ways of doing business. But one “norm” that they did not abandon was the typical practice of pairing a Cabinet Secretary who was coming out of elected office or the private sector having only limited experience in the executive branch, with a Deputy who knew the ins and outs of agency-land. Typically, the Deputy’s role is to be a “Sherpa” for the Cabinet lead – to guide him or her through the agency maze, manage the day-to-day operations of a behemoth bureaucracy, and take on the gnarly problems that if mishandled can derail any administration. Until now, they have worked quietly behind the scenes but wielded tremendous power even in the “supporting actor” role.  But they are about to get their star turn.

First, these Deputies actually know the laws their agencies implement – so they know exactly what they can do – or not do — to advantage powerful industry groups like big oil, mining and big agriculture. Contrary to what the President and his White House staff may believe, the law matters. And the people who know what it says have a distinct advantage in making regulatory policy, which is the job of the executive branch. These laws have lots of discretion built into them for agencies to work with — Congress could not include that much detail. But you must know what they say in the fine print. And these Deputies do because they helped to write them. Wheeler was a fixture in the Senate from 1995-2009, working for the Chair of the Environment and Public Works Committee, which oversees his current agency. And Bernhardt spent time working in the House of Representatives early in his career and then was a key player at Interior for the entire Bush 43 Administration, where he rose to be the agency’s top lawyer.

Second, these Deputies know people – and I don’t mean people at the White House. I mean they know the people in their agencies and on the Hill who actually get the work done. Agencies and Congressional staffs are huge organizations, but often it is individual public servants who make or break the success of a law, policy or regulatory initiative. As important as mastering the substance is, it is even more important to know the person who knows that substantive issue even better than you do. Moreover, it is also critical to know who to trust in the “deep state” bureaucracy to carry out your instructions faithfully. If you have to do all the legwork yourself, you cannot be nearly as effective. You need allies in the trenches, and both Wheeler and Bernhardt know dozens of people across each agency after working with them for decades. You can’t just walk in and instantly have the trust with the staff that is needed to deliver lasting political “wins.” It has taken these men years to build those networks and now they are in a position to take advantage of them.

Finally, these Deputies are in it for the long haul.   They have made it to the top by working their way up — not because they had been elected to office or made millions in business — but because they have studied government from the inside and out. Their legacies will be the policy successes they achieve that stand the test of time. Unlike their former bosses and the President and White House staff for that matter, they are not interested in doing permanent damage to the institutions of government. These men will follow the process rules of government closely so that courts or the next Democratic Administration won’t easily undo their achievements. They have real skin in the game. They will be working in Washington for decades in the future and they understand that this stint as a Cabinet Secretary is the ultimate ticket to influence in D.C. Just look at Bill Barr. One of them might even come back and serve as a Secretary of their agency again some day, as long as they play by the traditional rules.

The skills that make Andrew Wheeler and David Bernhardt good at their jobs, in my view, are not inherently bad. Substantive legal expertise, a widely dispersed and time-tested network of contacts throughout Washington, and a long view of their role in government are traits we should encourage in the political class of public servants. What makes them highly objectionable are their political views – their bias toward industry and powerful interests, and their lack of empathy for the innocent Americans who are harmed by their willingness to unleash harmful pollution and natural resource extraction, and their failure to safeguard our health, public lands, and wildlife. And that is why we must be afraid, very afraid, of all they will have the chance to achieve in the next two years after they are confirmed by the Senate.