Notice: Trying to access array offset on value of type bool in /var/www/wp-content/themes/Divi/includes/builder/functions.php on line 2421
 Flooding in the U.S. is getting worse, what we can do to prepare | Our Daily Planet

Flooding in the U.S. is getting worse, what we can do to prepare 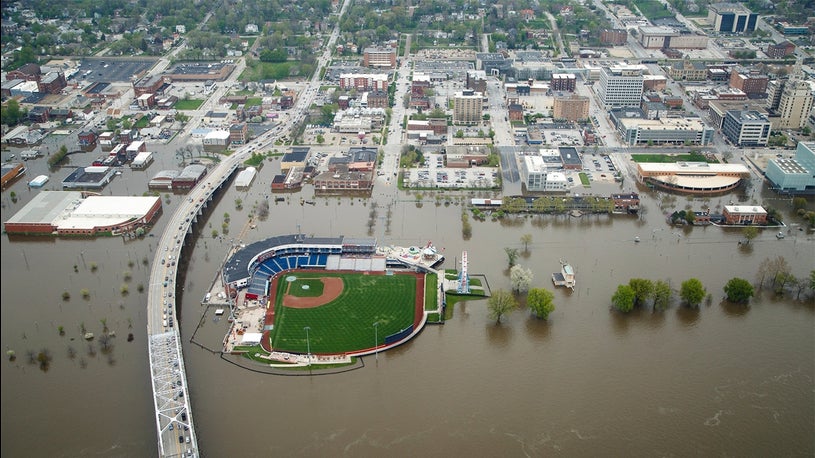 Flooding along the Mississippi. Photo: Weather.com

Flooding in America is becoming more frequent and severe and as NPR recently explained in a video, “In some parts of the Midwest and East Coast, extreme rain has already increased more than 50% since the early 1900s.” Warmer air as a result of climate change holds more moisture and thus increases the potential for torrential rain, as we saw in the Midwest this past spring where rapid snowmelt and sudden rains destroyed thousands of homes and killed at least 4 people. What we saw this spring (and even this past weekend) is a preview of what’s to come as tens of billions of dollars in river trade and farmland are under threat from projected flooding increases. Levees and floodwalls built to protect people from the rising waters of Mississipi and Missouri rivers were made to withstand rain patterns of the past and these structures are failing as rains become more severe. A “100-year flood” is becoming an outdated term and as a nation, we’re going to have to modernize our National Flood Insurance Program and to rethink how we build along floodplains.

Part of the problem on rivers like the Mississippi is that our flood control infrastructure has altered the river in a way that actually makes flooding worse and climate change is drastically adding to the problem. Last year’s National Climate Assessment report found that in large river basins like the Mississippi and Missouri rivers, floodwaters could inundate more populated areas, “resulting in drinking water contamination, evacuations, damage to buildings, injury, and death.”

If you live in a flood-prone place your whole life, it’s more likely than not you will experience a 100-year flood. People think the term “100-year flood” is one that comes every 100 years (makes sense right?) but the risk is greater than that, especially now that big floods have a higher probability of occurring. A 100-year flood has a 1% chance of happening each year but as the USGS explained, instead of the term “100-year flood” a hydrologist would rather describe this extreme hydrologic event as a flood having a 100-year recurrence interval. But even a 1 in 100 chance of flooding each year equates to about a 1 in 5 chance a home will flood at some point over the life of a 30-year mortgage and climate change is making those odds much worse.

We need to rethink the language used to describe floods, how flood insurance is offered and paid for and how municipalities think about how and where to build. As flooding continues to get worse, some Americans will have to answer the question of if rebuilding makes sense at all.

Why This Matters: Preparing our nation for increased flooding will take leadership and not kicking the can down the road. We must begin with fully funding the Army Corps of Engineers (funding that the President’s 2020 budget threatens to diminish), as well as increasing funding to the National Weather Service and buying residents out of floodplains much like what happened after Hurricane Sandy. As NRDC explained, floods are the most common (and among the most deadly) natural disasters in the United States which means that lives and billions of dollars of economic value are at risk if we continue to ignore this problem.