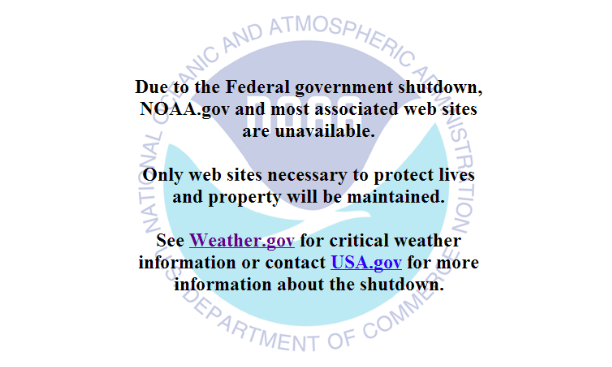 Among the most consequential impacts of the government shutdown are the strain and diminution of capacity to the National Weather Service (NWS) operations, upon which all public and private daily weather forecasts are based.  Weeks of working without resources have stretched to the limits the ability of the dedicated NWS meteorologists to continue to deliver accurate forecasts on which so much of our economy and public safety depends.  The Washington Post reported yesterday that though the NWS is “open” during the shutdown, it is limping along with minimal staff and the shutdown is beginning to take a toll.  According to The Post’s Capital Weather Gang, “[f]orecasters and managers are not getting paid. Weather models are not being maintained, launched or improved. Emergency managers are not being trained.”

As a result, the quality of daily weather forecasts is now declining.

Why This Matters: One-third of the U.S. economy is impacted by the weather.  Indeed, as The Post points out, that means many sectors such as transportation, energy, national security, agriculture, the stock market, not to mention forecasts of extreme weather — are now operating on less than the highly accurate forecasts they usually can rely upon. And imagine if we have a “billion dollar” storm such as a “snowmaggedon” while the shutdown drags on, with lives and profits at risk, which seems increasingly probable as we are now squarely in winter snow season.  Offices like the one that Saha works in are down to skeleton staff — only one or two rather than dozens.  This weather forecasting degradation is much riskier to the general public than any risk we face from the lack of a feckless border wall segment.