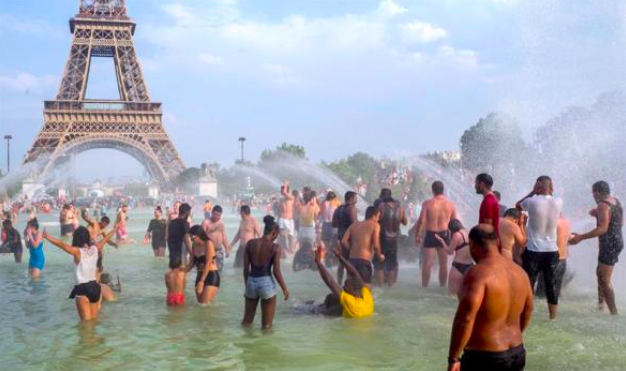 There are worse ways to deal with the heat in Paris.   Photo: Rafael Yaghobzadeh, AP via Accuweather

For a second time this summer, unprecedented hot weather is disrupting daily life as high-temperature records are being broken across the European continent.

Why This Matters:  June was the hottest month ever, but we are willing to bet that July will now beat it.  We think of storms and fires as the most devastating climate impacts, but in fact, heat is also a real issue and will impact many more people than any localized event because it can be so widespread.  Last weekend in the U.S. it was more than 160 million people who were impacted, this week it was much of Europe who had restrictions on autos imposed, water use was cut back, and train travel was impacted due to hot tracks, and air conditioning is in short supply.  The same kind of heat gripped the southern hemisphere during its summer earlier this year.  Many people may scoff, saying that it is just a hot summer. But the fact is that according to the National Oceanic and Atmospheric Administration (NOAA), 9 of the last 10 years have seen record-breaking heat.  And this week, NOAA says it is certain that 2019 will end among the five warmest years on record.

Europe Does Not Have Air Conditioning – Yet

The New York Times wrote yesterday about the lack of air conditioning making the heatwave much harder to weather in Europe.  According to The Times:

The chief environmental public health scientist in the U.K. government warned that the extremely high temperatures were endangering older people, those in poor health and very young children.  And volunteers passed out bottles of water on the streets in Paris.  France’s health minister said, “Everyone is at risk with these kinds of temperatures.”