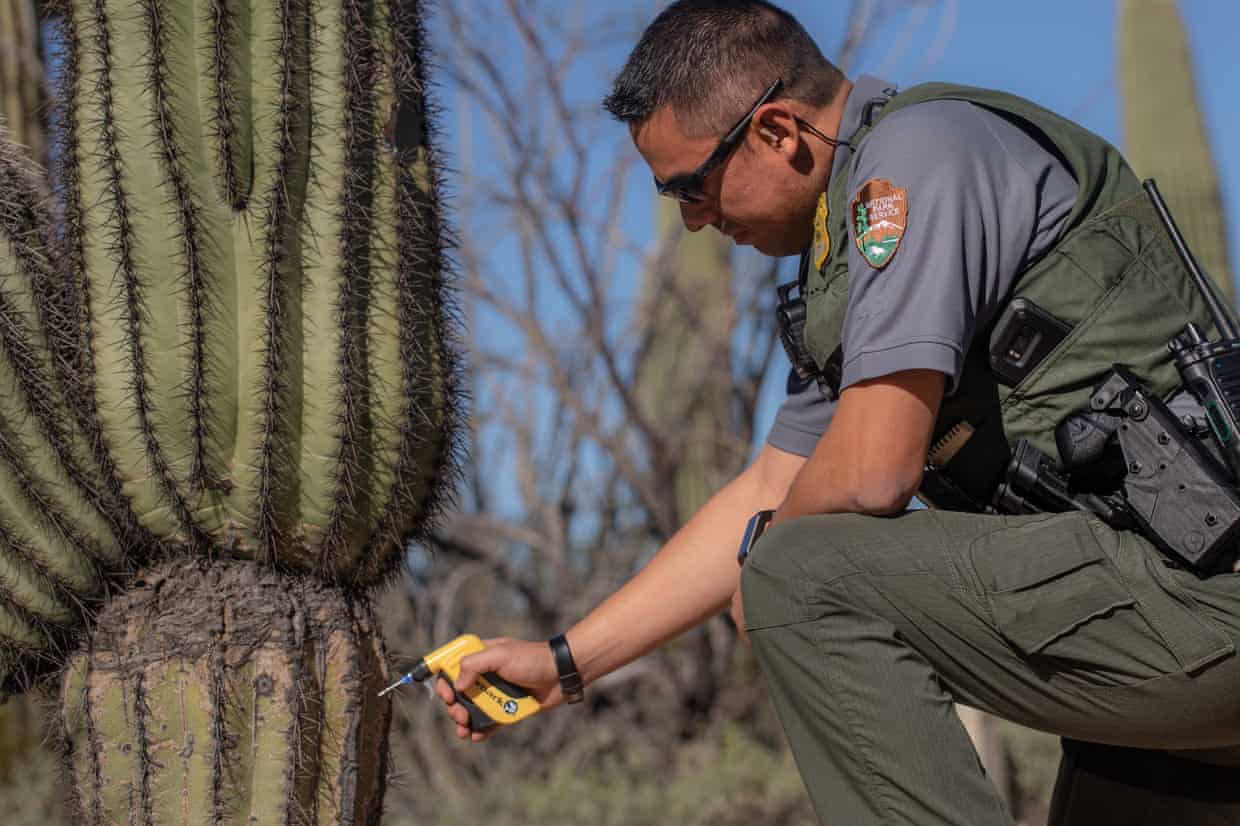 Cacti and succulents have rapidly grown in popularity in the past few years and it turns out that the insatiable demand to have the trendy plants adorn homes is driving poachers to dig them up from the wild and increasingly on public lands. The Guardian recently reported in its in-depth piece that “in the US alone, sales of cacti and succulents surged 64% between 2012 and 2017; a market that is now estimated to be worth tens of millions.” Saguaro cacti are especially susceptible and as we wrote last year, park rangers at Arizona’s Saguaro National Park have begun microchipping the giant succulents so as to prevent poaching and help apprehend thieves. The good news is that the chips and media attention of the microchipping program has proven to be an effective deterrent to poaching.

The Guardian also explained that “across the south-west, cacti are being stolen from public lands in increasing numbers. From soaring saguaros to tiny, rare species favored as indoor house plants, the booming global demand for cacti is driving a shadowy, underground trade that’s difficult to police. Moreover, experts say, such trends risk destroying sensitive species forever. Saguaros aren’t just beautiful to look at; they also fetch a hefty price, up to $100 a foot, on the black market, where they are enormously popular with landscapers.” Tourists to parks in the Southwest will take home (sometimes very rare or fragile) specimens home with them and have even shared the coordinates or desireable cacti on social media. In other parks like Big Bend Ranch State Park, some plants are at risk of being wiped out completely. One of the major challenges for conservationists is that the most endangered cacti are the most vulnerable to theft. “The more rare or harder it is to get, the more valuable the cactus is to collectors,” said Steven Blackwell, a biologist for the Desert Botanical Garden in Phoenix. Big cactuses are also extremely slow growing and can take decades to mature in a nursery so poachers have found it easier and cheaper to take them from the wild.

Why This Matters: Many of these poaching crimes go unprosecuted and under the Trump administration referrals at federal agencies for prosecution of crimes have hit historically low levels. If poaching laws aren’t enforced then criminals become emboldened to continue stealing delicate and rare plants. Additionally, the success of the saguaro microchipping program shows the need to fund the National Park Service as the agency is constantly grappling with underfunding. Also, this is a good lesson to research before you buy plants– make sure you buy them from a reputable nursery or retailer to ensure that you’re not supporting plant poaching.

Even Deeper: If you love the look of succulents but don’t exactly have a green thumb, consider buying a print from my (Miro’s) former classmate and talented artist Lili Arnold. Her botanical block prints are so beautiful!

by Amy Lupica, ODP Staff Writer A condo collapse in Miami is prompting new conversations about the threats rising sea levels and flooding present to the nation’s infrastructure. Experts say that it’s too early to determine whether or not climate change contributed to the partial collapse of the Champlain Towers. But they also warn that as sea levels rise […]

Build Up Wetlands, Save The Hot Sauce

by Amy Lupica, ODP Staff Writer Florida Governor Ron DeSantis and part of the state Cabinet have approved a highway extension spanning a portion of the Everglades. The move rejects a 2020 recommended order from Administrative Law Judge Suzanne Van Wyk, claiming that the project was incompatible with continued efforts to establish protections in the region. Legal challenges are […]