SHIP CHANNEL COLLISION: look at the impact of a crash involving a barge, carrying a toxic gas product, and a tanker. https://t.co/mwIMUrypcu #abc13 pic.twitter.com/5c8TIYECMC

After two barges struck an oil tanker, at least nine thousand barrels of gasoline “blending stock” called Reformate spilled into the Houston ship channel, causing it to be closed, and creating a noxious odor in the neighborhoods nearby the spill.  Texas state officials are collecting air monitoring samples and say they will notify the public if any of the readings are at dangerous levels.

This is the second such toxic incident in the channel in two months.  In late March, the Coast Guard deployed approximately 90 vessels to contain, clean and control an oil spill in the ship channel that leaked after a fire damaged or destroyed several storage tanks at the ITC facility in a suburb called Deer Park. And there were two chemical plant explosions (one of which was the precipitating incident to the first channel spill) in the same area near Houston in late March and early April.

Why This Matters:  Houston really seems to have a chemical safety problem.  Two chemical explosions on land and two big oil spills in the ship channel in the last two months ought to spark some sort of safety review in the area.  And the warnings each time seem insufficient.  For example, a local toxicologist tweeted after this latest spill that reformate should not be breathed in or touched — it is a severe respiration hazard and it’s caustic to the skin. The local warmings did not seem to involve restricting fishing or coming into contact with the channel waters.  This double whammy will, according to local officials, have “short and long term impacts,” because they pose risks to marine life.  Seems like an understatement.  Not to mention that the entire region was under flood watch over the weekend after days of torrential rains flooded neighborhoods and even closed schools on Friday.  The National Weather Service (NWS) had issued an ongoing flash flood watch for the area stretching from Houston, Texas, to the coastal city of Galveston, Texas. 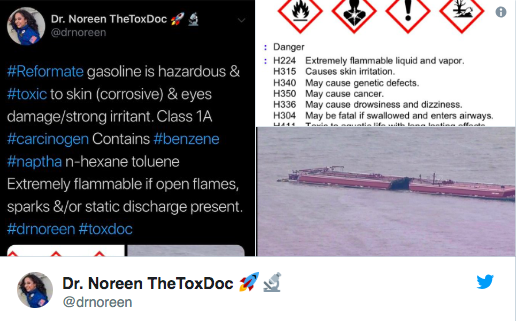