Notice: Trying to access array offset on value of type bool in /var/www/wp-content/themes/Divi/includes/builder/functions.php on line 2421
 Koala Bears On Road to Extinction | Our Daily Planet

Koala Bears On Road to Extinction 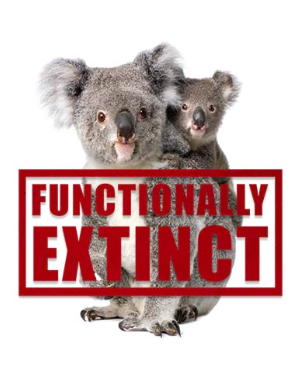 The Australia Koala Foundation reported on Tuesday that the population of these beloved animals is in steep decline in many areas of Australia, and estimates are that only 80,000 remain in the wild, which makes the species “functionally extinct.” There are many causes for the loss in koalas, including climate change, loss of forest habitat, and diseases.  Newsweek reported that koala populations have been in decline since 2012, and have been listed as “vulnerable” in Queensland, New South Wales, and the Australian Capital Territory because populations in these regions have declined significantly or are at risk of doing so.

The Foundation blamed the Australian government for not doing more to protect the koala, saying “[n]o one has written anything to protect the Koala in the last six years of Government.”  According to the Foundation, there is currently no legislation, anywhere in the country, that can actually protect Koalas and Koala habitat in Australia because the “vulnerable” listing decision does not trigger protections.

Why This Matters: Saving habitat is crucial for species like the koala. And it is one of the hardest things to get done politically.  As the U.N. extinction report makes clear, we are at a critical crossroads and need to educate the public about the extinction crisis now, before it is too late.  Koalas and similarly beloved animal species can help get the message across. According to many experts, the answer is clear: protect 30% of the planet for nature by 2030.

What You Can Do:  To help koalas, click here.  And to learn more about the “30×30 Campaign For Nature”, click here.