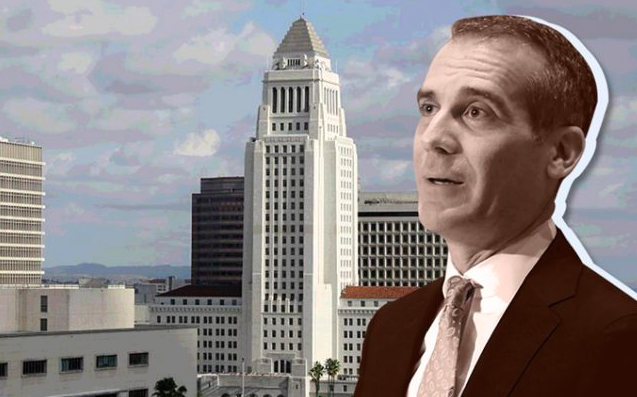 It was Green Day in California on Monday because, in addition to Beto O’Roarke’s climate policy rollout, the Mayor of Los Angeles, Eric Garcetti, announced a Green New Deal for Los Angeles — a bold plan to deal with carbon emissions in the city, with particular focus on green buildings and zero-emission cars, which would remake the city which is known for both its traffic and its smog.  The plan sets some ambitious targets, according to the Los Angeles Times, including:

According to The Times, Garcetti argued that “fighting climate change, expanding the economy and improving people’s quality of life ‘go hand in hand.”’The city’s sustainability plan estimates the creation of 300,000 ‘green jobs’ by 2035, on top of the 35,000 green jobs Garcetti says have already been created since he took office.”

Why This Matters:  If Washington won’t pass an infrastructure bill, and the Green New Deal is too radical for the country, then cities like Denver, New York, and Los Angeles will “just do it”  themselves.  If all politics is local, then that is where the Green New Deal will have to begin. New York City’s City Council and Mayor passed their Green New Deal about 10 days ago.  It is looking more and more like a race to the top led by mayors and local governments.  Good for them.