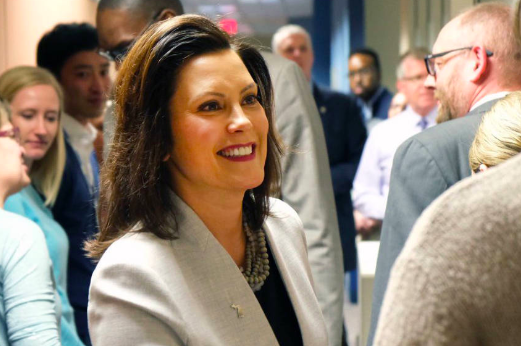 Governor of Michigan Gretchen Whitmer Photo: Office of the Governor

Newly elected Michigan Governor Gretchen Whitmer on Monday issued two executive orders and one executive directive to strengthen protections for the Great Lakes, clean up groundwater and drinking water, and fight climate change.  Governor Whitmer wasted no time “shaking up” her Cabinet in order to fulfill a campaign promise she made to shift the focus in the state back to environmental protection and developing clean energy, issues we highlighted in our deep dive into the issues in Michigan last fall. Governor Whitmer also created three new offices within the new environmental agency: a “Clean Water Public Advocate,” an “Environmental Justice Public Advocate,” and an “Office of Climate and Energy,”  In addition, Governor Whitmer abolished an Environmental Rules Committee, which was created under the prior Governor to give industry a process to review environmental regulations, but it was roundly criticized by environmentalists who dubbed it the “Fox Guarding the Hen House Act.”  According to the Governor’s office:

“This is about finding real solutions to clean up our drinking water so every Michigander can bathe their kids and give them a glass of water at the dinner table safely,” Whitmer said in a statement. “We have a chance to build a system that really works so we can protect our water and improve public health. We’ve also got to take action to protect our state from the effects of climate change. The science is in, and it’s time we get to work to mitigate the impact of climate change for the sake of our kids and future generations in Michigan.”

Why This Matters:  Michigan joining the U.S. Climate Alliance and creating a new office to move the state forward on reducing greenhouse gas emissions and developing clean energy sources is an important step for what is sure to be a battleground state in the 2020 election.  Moreover, the Governor’s focus on environmental justice and her appointment of “advocates” within her Administration who will work to ensure that poor, rural and minority communities are not overlooked is also tremendous progress, as is the disbanding of a committee of industry representatives that had the power to overturn regulations they found objectionable.  In keeping her promises, the Governor of Michigan put the state on the right path to overcoming its environmental problems, particularly regarding clean water.  Nothing could be more important to her state — the Great Lakes hold 21 percent of the world’s surface freshwater.