Notice: WP_Block_Type_Registry::register was called incorrectly. Block type "core/video" is already registered. Please see Debugging in WordPress for more information. (This message was added in version 5.0.0.) in /var/www/wp-includes/functions.php on line 5664
 One Amazing Thing: A New Species of Killer Whale | Our Daily Planet

One Amazing Thing: A New Species of Killer Whale

A “new” species of killer whale was discovered in January off the southern coast of Chile by marine mammal scientists from the National Oceanic and Atmospheric Administration (NOAA).  The so-called Type D killer whales were found once before, in 1955, when a few of them washed up on the shores of New Zealand – but scientists then believed those were just a genetic aberration.  This type of whale has been a mystery until now because it lives far offshore in the stormy waters just above Antarctica.  According to The New York Times, Bob Pitman, the NOAA scientist who found it had been on a 14-year quest to prove it existed, and amazingly was able to obtain three eraser-size skin samples that will provide definitive evidence that this is indeed a species that has not previously been documented.  It was quite a feat to find the whales in an isolated area off the tip of Chile and then to collect the DNA samples in “roiling” seas.  But what a find — the largest previously undiscovered creature on the planet! 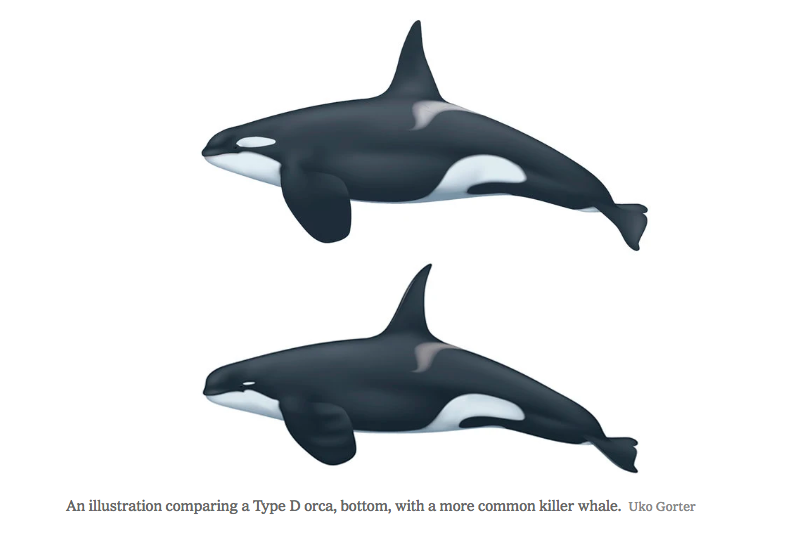