Notice: WP_Block_Type_Registry::register was called incorrectly. Block type "core/video" is already registered. Please see Debugging in WordPress for more information. (This message was added in version 5.0.0.) in /var/www/wp-includes/functions.php on line 5664
 One Frigid Thing: April Blizzard Blasts The Plains | Our Daily Planet 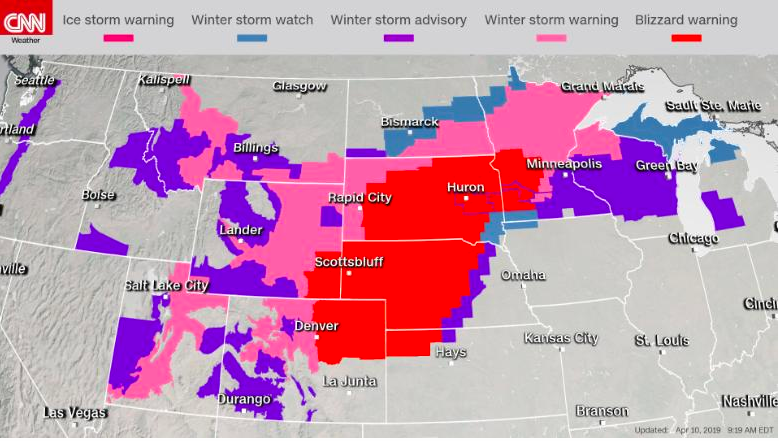 The temperature on Tuesday in Denver was 78 degrees, but yesterday Denver was dealing with a major snowstorm that caused the cancellation of a baseball game between the Rockies and the Atlanta Braves.  In South Dakota, a portion of I-90 had to be shut down on Wednesday night due to the poor conditions.  Weather forecasters predict that up to 30 inches of snow could fall in some areas of South Dakota by the time the storm exits the region today.  Meanwhile, thousands of airline passengers were stranded in Denver and Minneapolis when their flights were canceled.  Four million people are under blizzard warnings today including parts of Wyoming, Colorado, Kansas, Nebraska, South Dakota, and Minnesota.  The storm is also packing dangerous winds — its early stages of the storm knocked out power to 50,000 in the Los Angeles area and kicked up dramatic dust storms in Nevada. And it is headed to the areas already hard hit by flooding along the Missouri and upper Mississippi Rivers.  Happy spring in the era of climate change!