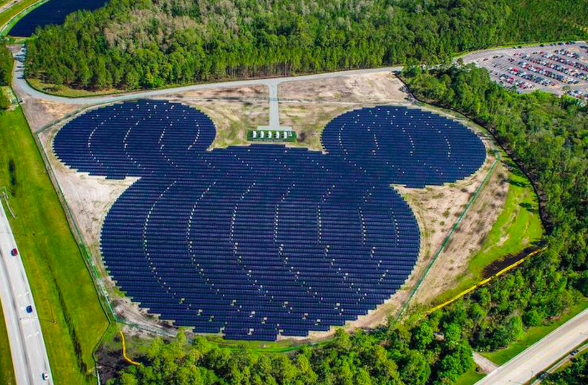 Disney World turned on the power February 27th to its brand new 50 MW solar farm, Axios reported. The new solar farm sits on a large parcel right next to Disney’s Animal Kingdon in Orlando and will create enough clean power to keep things running at two of the four Disney resorts there, which is 25% of its total power usage.  And the project reduces greenhouse gas emissions by 57,000 tons which is equivalent to removing 9,300 cars from the road.  Disney World uses over a billion kWhs of electricity, costing about $100 million dollars a year, so some energy efficiency upgrades might also pay off.  In fact, according to a report in Forbes, “Cinderella Castle’s holiday display of 170,000 lights has been painstakingly switched to LED lighting, reducing the amount of power needed down to that required to power four coffee pots.”  Interestingly, Forbes also notes that at one point Disney considered early on using nuclear power to light the Magic Kingdom as consistent with their futuristic vision for Epcot, but decided against it.  When it comes to climate change, it’s a small world after all.