Notice: Trying to access array offset on value of type bool in /var/www/wp-content/themes/Divi/includes/builder/functions.php on line 2421
 Pets Increasingly Getting Their Due Thanks To Millennials | Our Daily Planet

Pets Increasingly Getting Their Due Thanks To Millennials 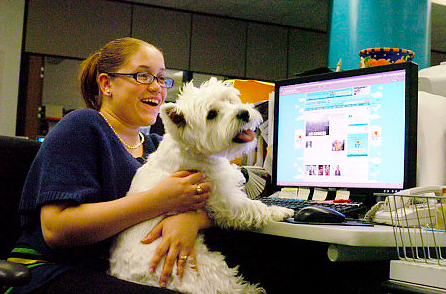 Millennials are much more likely to enjoy their job and want to stay in it if they are allowed to bring their pets to work, according to a recent survey by Nationwide Insurance.  And a millennial who sued the Meeker Housing Authority in Denver, Colorado for violating the federal rights of tenants with disabilities by charging a fee for companion animals recently agreed to settle his case against the authority for nearly $1 million.  Millennials are increasingly forcing a change in U.S. society’s attitudes toward pets.

Why This Matters:  Both these stories demonstrate what the Human Animal Bond Research Institute, people have a special bond with their pets — studies show that the benefits of having a pet include decreased blood pressure, reduced anxiety, and enhanced feelings of well-being.  The Nationwide survey showed this is particularly true for millennials, who are far more likely Generation Xers and baby boomers to value a pet-friendly work environment.  Animals as companions provide a connection to the natural world that may help many of us to understand the importance of the natural world.  We rely on animals for far more than just food and labor.  And as the millennial generation matures, their influence on animal-friendly policies is likely to grow.

Amazon Is the Most Pet-Friendly Company.  Rover.com recently reported that Amazon is tops when it comes to pets roaming the office.

In its report on the top companies, Rover.com said that “Today, 40 percent of all workers feel overworked and pressured, and dogs can offer much-needed relief in an office environment.”

The Denver Lawsuit’s Outcome Was Not Surprising.  The judge in the case had ruled several months ago that the housing authority’s $300 fee and its denial of requests for an exception by the tenants with disabilities was a violation of federal law.

What You Can Do:  See if your office will allow you to bring in your dog this Friday, June 21s — which is National Bring Your Dog To Work Day!