If you ever wondered what a polar vortex looks like from above, this is it.  Grab a blanket and bundle up.  The midsection of the country — even places like Minnesota that are accustomed to cold air — are bracing for the worst cold weather that has been seen in a generation.  Temperatures could break previous cold records — according to CNN, “between Tuesday and Thursday, temperatures will plunge to 20-40 degrees below zero in the Upper Midwest and Great Lakes. Wind chills will plummet to 35-60 below zero.”  Up to 75% of the U.S. mainland will endure below freezing temperatures this week.  It’s so cold, the U.S. mail delivery is suspended in some parts of the upper midwest!

According to The Capital Weather Gang, dozens of snow belt cities have forecasts at least within one degree of record cold temperatures, including Chicago, Des Moines, Cleveland, Detroit and Minneapolis, and the record-breaking cold is expected to last through tomorrow there. 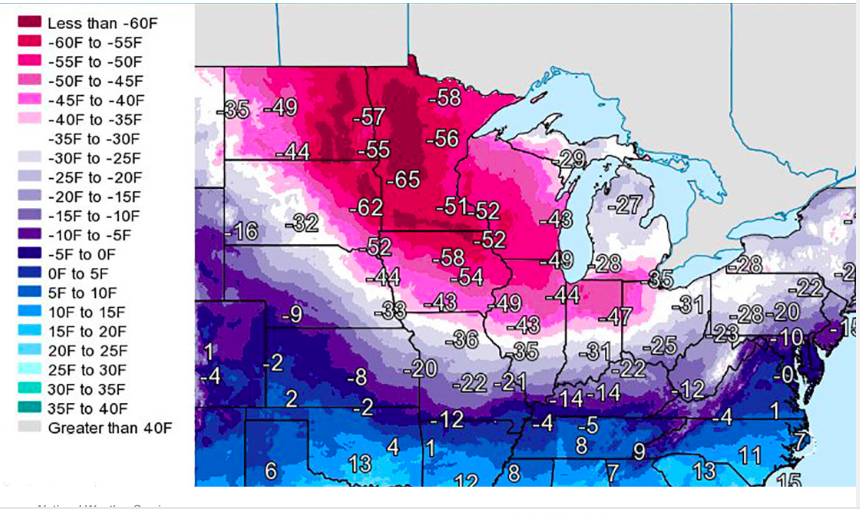 Why This Matters:  This kind of cold can be deadly.  According to The Washington Post’s Capital Weather Gang, “A recent report from the Centers for Disease Control and Prevention found that cold weather is responsible for the majority of weather-related fatalities.”  Kendra Pierre-Louise explains in The New York Times that the polar vortex dips down after a sudden warming event causing the air to escape the polar region and “hit the Lower 48 with piercing shots of cold, intense bouts of storminess and bitter wind chills well below zero. How cold it gets in the Lower 48 depends on how much of the vortex breaks off and how far south it gets.”   The temperature yesterday was 33 degrees in Anchorage at the same time as it was 6 degrees in Chicago.  Climate change is making the Lower 48 winters chillier and chillier — these polar invasions have happened more frequently in recent years and last for several days at a time. 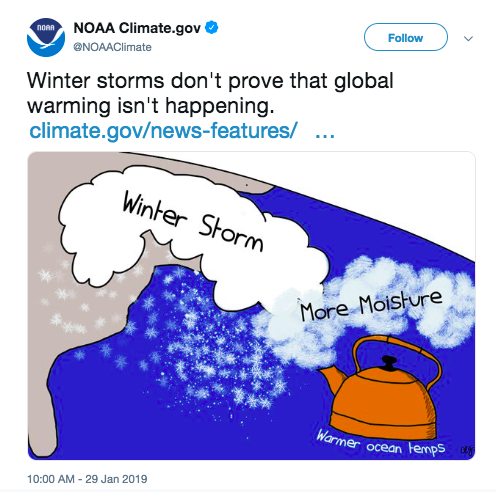 To Go Deeper:  You might want to read The Gang’s excellent longer explanation of the polar vortex here — this is likely to be a frequent event for us here in the Lower 48. And see the data visualized here.  For a laugh, watch Jimmy Fallon make fun of the return of the polar vortex back in January 2014.