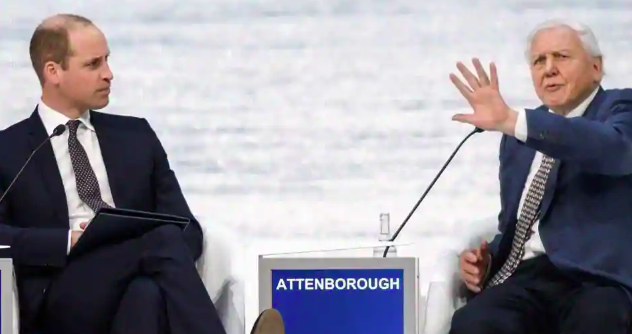 Sir David Attenborough sat down for a rare interview this week at Davos with the Duke of Cambridge.  We thought we would bring you some of the highlights.  To see the whole interview, click on it below.

Duke of Cambridge: How different was the natural world was then [in the 50’s] than it is today?

Sir David:  The world then seemed like an unexplored world…I went to West Africa for the first time and it was a wonderland…Everywhere you turned you saw something new…The human population was only a third of the size that it is today.  So you really did the feeling of what it might have been like to be in the Garden of Eden.

Duke of Cambridge:  Your series have been seen by literally billions of people worldwide.  Are you surprised that they are still so popular in the age where social media entertainment is so short-lived and fast moving?

Sir David:  I am not in the least surprised, oddly.  Because I don’t believe that a child has yet been born that did not look at the world around it and wonder…in this day in age who is not to wonder of the miracles of the electronic age…[but] if you lose that first wonder, you have lost one of the greatest sources of delight and pleasure and beauty in the whole of the universe and so caring for that brings joy and enlightenment which is irreplaceable.

Duke of Cambridge: For many years you held back speaking about environmental issues.  Is there a reason why you later decided to speak out?

Sir David:  The notion that human beings would exterminate an entire species…back then seemed the exception.  Now we are only too aware that the whole of the world is at our disposal…Now there are more people living in towns…it means the majority of the human race are out of touch to some degree with the richness of the natural world…but at the same time people watch the natural world on television get a vision of the natural world that people could never have seen a hundred years ago.

Duke of Cambridge:  How urgent is the climate crisis now?

Sir David:  It is difficult to overstate it … We are now so numerous, so powerful, so pervasive, and the mechanisms we have now for destruction are so wholesale and frightening … We have now to be really aware of all the damages we are doing.

Duke of Cambridge:  Do you feel that the narrative around climate change and environmentalism sometimes can be quite pessimistic and that actually there is a real need for an injection of optimism?

Sir David:  I shrink from saying I am either an optimist or a pessimist.  What good does it do to say that I am a pessimist?  That is not the point.  The point is that we have this option ahead of us.  We have to take the option of protecting the natural world and we are discovering more ways in which we can do so…We [now] have the power, the knowledge to live in harmony with nature.

Duke of Cambridge:  What is your message to the people here in this room?