Notice: Trying to access array offset on value of type bool in /var/www/wp-content/themes/Divi/includes/builder/functions.php on line 2421
 Rubber chicken is not fake news! | Our Daily Planet

Rubber chicken is not fake news! 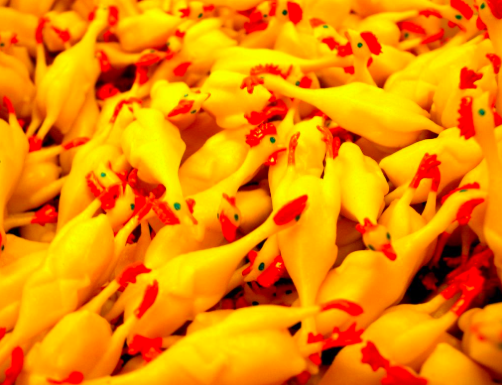 If you thought those frozen chicken nuggets from Perdue and Tysons Foods tasted terrible, there could be a reason why — they had bits of rubber and wood and unlabelled other products like milk (an allergen) in them.   Consumers found pieces of “soft, blue rubber” inside the food and contacted Tysons; similarly, consumers found wood inside Purdue organic, gluten-free nuggets.  All were recalled — to check exactly which packages and products to look for, check the current USDA recall and alerts list here.

How did the USDA find out, you ask?

Where did all this “foreign matter contamination” come from?  According to The Times,

The product recalls were not impacted by the shutdown — these offices in the USDA kept working through the shutdown.  The FDA inspections of vegetables and fish were impacted, but not meat inspections at the USDA.

Why This Matters:  The number of food safety recalls has been particularly high this year — between these and the lettuce recalls, the list is quite long.  Our food safety system is not as strong and comprehensive as it should be.  Some of these nuggets were labeled as “organic” — but those labels don’t mean anything if there are lax safety regulations, infrequent inspections, and minimal enforcement.  Allergens slipping into food items unmarked can cause serious illness and even death.  As a mom of two kids with deadly nut allergies, I (Monica) am concerned.  Our civilian agencies are not funded at the level they should be.  We have been running the non-defense agencies on shoestring budgets for far too long. Indeed, the C.D.C. estimates that salmonella infections alone, the vast majority of them from food, cause about 1.2 million illnesses and 450 deaths a year.  We should do better.