Sea level rise is having a big impact on coastal birds 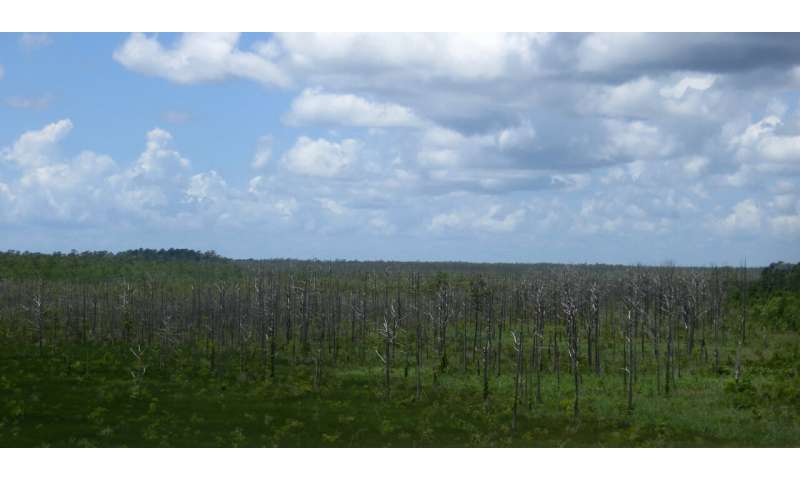 When saltwater inundates coastal forests as sea levels rise, it kills salt-sensitive trees, leaving “ghost forests” of bare snags behind. A new study from North Carolina State University revealed that changes in vegetation as salt water moves further inland posed very different outcomes for different varieties of coastal bird species. Surprisingly, species of high conservation value responded positively to the ghost forests— for instance, the northern bobwhite quail, which has been doing poorly across most of its range in recent years.

However, other species that live in closed-canopy forests not affected by saltwater intrusion, such as the hooded warbler, lost habitat when ghost forests formed.

This means that we are just beginning to understand how this accelerated sea level rise will affect plant and animal species.

Why This Matters: The researchers explained that overall, ghost forests supported a different group of bird species than the forests they replaced. There’s still so much we don’t know about how climate change will affect our planet and how it might shift entire ecosystems. While these ghost forests may soon welcome an entirely new group of bird species, we can’t yet say how this will affect all other animals in the ecosystem. What we do know is that a shift from verdant woodlands to ghost forests/marshes will mean that this land will be far less able to absorb and store carbon dioxide as forests are one of the best weapons we have to fight climate change.

Go Deeper: Read the UN’s recent post “5 Things You Need to Know About Forests” to put in better perspective why losing forest cover is so detrimental.

In the Midst of Another Drought, California Trucks Millions of Salmon to the Pacific Ocean

by Natasha Lasky, ODP Staff Writer As the Guardian reported, California is now in its second year of drought after a winter with little precipitation and it is the state’s fourth-driest year on record, especially in the northern two-thirds of the state, according to the California Department of Water Resources. Because of drought conditions, the […]

A Hunt That Must End

By Azzedine Downes In 1965, the Canadian government asked then 30-year-old Brian Davies to join a group of consultants to visit the annual seal “hunt” taking place in the Gulf of St. Lawrence in Eastern Canada. The government sought feedback on how to make the hunt more humane. What Davies saw was there would change […]