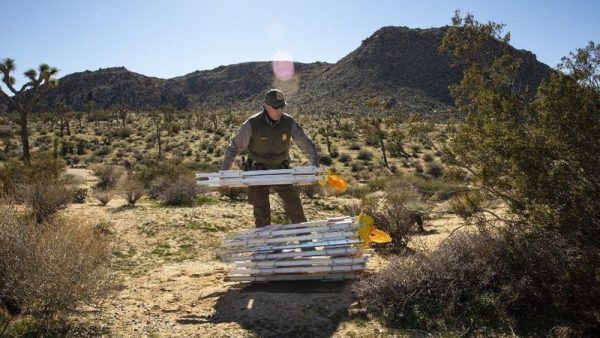 Park Ranger Rob Evans places temporary barriers off the side of the road near the entrance to Joshua Tree National Park on Dec. 29. Photo: Jay L. Clendenin/ LA Times

As of last Friday, the government shutdown has gone on for 13 days, with no end in sight. The shutdown has meant that national parks have been severely understaffed as trash and restroom waste have been allowed to pile up. As the Washington Post explained, no one is at the gate. No one is collecting a fee. The visitor centers are closed. There are some law enforcement and emergency personnel on site, but certainly nothing as standard as a park ranger who can answer a question. Lack of enforcement has meant that some park visitors have not abided by park rules. The LA Times reported that At Joshua Tree National Park, champagne bottles were left strewn on the desert floor on New Year’s morning, along with a prom dress. Someone had kicked one of the iconic trees, perhaps to see how sturdy it was and human waste was piling up. Joshua Tree’s popular camping area had to eventually be closed due to all the waste. At Yosemite National Park, a hiker died after a fall and the investigation into his death is taking far longer than normal due to the shutdown. As CNN reported, emergency services are delayed at other parks, including Big Bend National Park in Texas, where a hiker broke his leg and was initially assisted by fellow visitors before meeting up with a park ranger.

Former National Park Service director Jonathan Jarvis said that “Leaving the parks open without these essential staff is equivalent to leaving the Smithsonian museums open without any staff to protect the priceless artifacts.” The National Park Foundation, several states, businesses, and non-profits are spending money to keep some national park sites open. Additionally, teams of volunteers have worked to clean up trash at various parks but without resources to haul trash and empty toilets, their work can only go so far.

Why This Matters: President Trump has stated that if he doesn’t get funding for his border wall (which even conservative voices have called ineffective and a waste of money) that he’s prepared to let the shutdown drag on for months, if not years. In ill-conceived attempt to keep people out of our country, Trump has made the parts Americans love about their country (like national parks) suffer the consequences of his political squabbles. There are many amazing things about our country but our natural spaces are near the top of the list, allowing sacred and fragile ecosystems to become damaged is unacceptable. All green voters should remember this shutdown in the 2020 election.