Notice: Trying to access array offset on value of type bool in /var/www/wp-content/themes/Divi/includes/builder/functions.php on line 2421
 Solar At the Ballpark | Our Daily Planet

Solar At the Ballpark 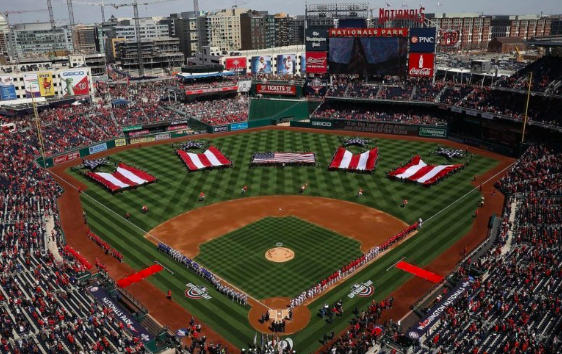 Solar panels already power several major league baseball stadiums, and the latest is National Park in Washington, D.C., which announced yesterday that they have teamed up with WGL Energy Systems to install 4,080 solar panels above two of the garages next to the Park and it will supply power to the ballpark and provide covered parking for fans.  MASN Sports reported that:

The baseball team in “first place” for solar is the San Diego Padres — their Petco Park installed a 336,520-watt Solar Power system prior to opening day in 2018, for a savings of more than $4 million. Last year the Arizona Diamondbacks installed a similar solar array at Chase Field in Phoenix — an open-air pavilion for fans is topped with solar panels that provide shade from the desert sun.  Safeco Field in Seattle also has an impressive 33-kWh solar system, which generates 40,000-kilowatt hours of electricity each year, which is enough energy to offset 28 metric tons of CO2 emissions.   The Boston Red Sox, St. Louis Cardinals, Cleveland Indians, Kansas City Royals, and San Francisco Giants all also have solar powered systems at their ballparks.

Why This Matters: Baseball is America’s pastime — and as a result, stadiums are the perfect place to show leadership on renewable energy and educate many fans who may not know much about clean energy, climate change, and sustainability.  So we say, play ball!  And a tip of the cap to the teams that do it under solar-powered lights!