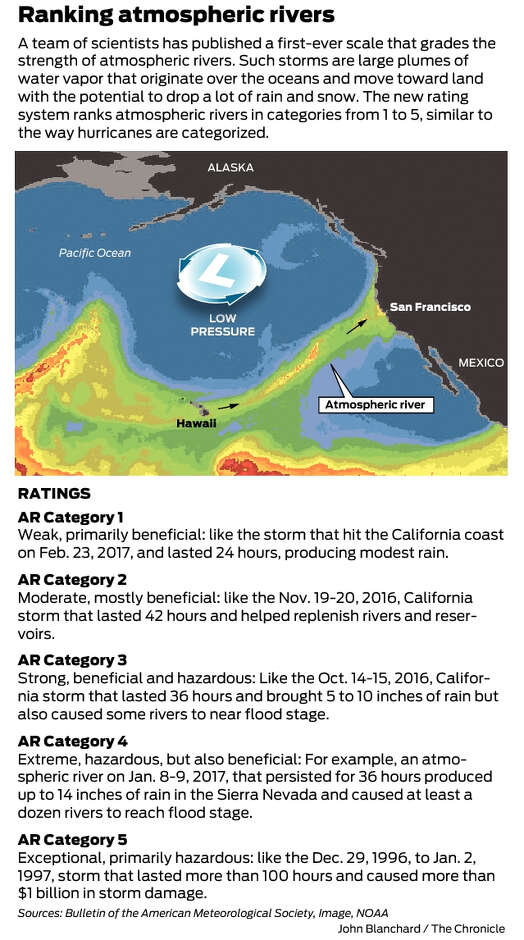 We’re all familiar with the 1-5 rankings that Atlantic hurricanes receive based on the Saffir-Simpson scale which assigns hurricanes a number based on their sustained wind speed. However, despite experiencing heavy rainstorms, the Pacific coast hasn’t had a similar rating which is useful knowledge for people to have when storms are imminent. But now, as the SF Chronicle reported, Pacific storms that bear down on the West Coast are about to get the same deference as hurricanes in the Atlantic and tornadoes in the Midwest: a rating system to attest to their strength created by meteorologists, the National Weather Service, California Department of Water Resources, U.S. Geological Survey and the U.S. Army Corps of Engineers.

The scale will rank the giant wet fronts common in California, known as atmospheric rivers, in degrees of force from 1 to 5. The ratings are meant to give communities a more precise sense of what’s ahead and are necessary to cut through the hype that has surrounded atmospheric rivers in recent years, say the team of state, federal and university scientists behind the ratings. These long plumes of moisture that move with the jet stream, while a relatively new concept for California households, already have a larger-than-life reputation. After dozens blew through during the winter of 2016-17, the most in decades, many people associated them with disaster.

Why This Matters: As the underwriting publication Property Casualty 360 explained, atmospheric rivers can carry between 7.5 to 25 times the flow of water that passes through the mouth of the Mississippi River. These rivers in the sky can be 300 miles wide, a mile deep and more than 1,000 miles long and while most are small, but they can be massive and fast-moving. When the storms make landfall, they often release rain or snow (sometimes in large amounts) and account for 50% of the annual precipitation in California as well as the West Coast’s biggest storms. Having this rating system will help government officials, community leaders, and citizens better prepare and know when to evacuate. The rating system couldn’t come fast enough as the San Francisco Bay Area is bracing for an atmospheric river drenching tomorrow.

Go Deeper: Accuweather reported yesterday that after a winter’s worth of snow brought major disruptions to the Seattle area this past weekend, the unusual train of snowstorms will continue this week with record cold bringing more hazards. While West Coast winter storms have a couple of different origins, atmospheric rivers are a big cause.